Yesterday, we featured two studies (Do I Look Fat ? Lipid Suppression in CSI with Spatial Priors and Highly Undersampled Peripheral K-Space and Accelerated DSI with Compressed Sensing using Adaptive Dictionaries ) that used dictionaries learned as a source of additional information to be used for reconstruction in the MRI world. Today, we have a similar approach but with electron microscopy. I note their use of the  dictionary learning SPAMS package whereas the the previous paper this week used K-SVD by Miki Elad and Ron Rubinstein. 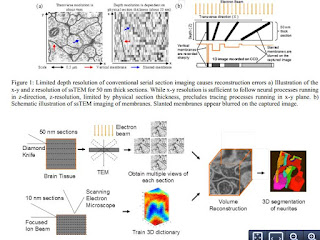 A central problem in neuroscience is reconstructing neuronal circuits on the synapse level. Due to a wide range of scales in brain architecture such reconstruction requires imaging that is both high-resolution and high-throughput. Existing electron microscopy (EM) techniques possess required resolution in the lateral plane and either high-throughput or high depth resolution but not both. Here, we exploit recent advances in unsupervised learning and signal processing to obtain high depth-resolution EM images computationally without sacrificing throughput. First, we show that the brain tissue can be represented as a sparse linear combination of localized basis functions that are learned using high-resolution datasets. We then develop compressive sensing-inspired techniques that can reconstruct the brain tissue from very few (typically 5) tomographic views of each section. This enables tracing of neuronal processes and, hence, high throughput reconstruction of neural circuits on the level of individual synapses. 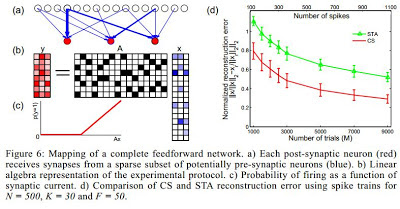 Liked this entry ? subscribe to Nuit Blanche's feed, there's more where that came from. You can also subscribe to Nuit Blanche by Email, explore the Big Picture in Compressive Sensing or the Matrix Factorization Jungle and join the conversations on compressive sensing, advanced matrix factorization and calibration issues on Linkedin.
By Igor at 10/11/2012 05:08:00 AM