This is the site at the Southwest Research Institute where we will be demonstrating our vehicle.

Finding a needle in a very large haystack

It looks like using MALDI TOF/MS one can now do data mining that yields markers to Multiple Sclerosis. Let us hope a similar technique to find markers for autism can be developed similarly. Unlike what Paul Shattock says, I don't believe clues can be found in only one peak (IAG), but then again, we need to show that it is not a question of belief, we need large sets of data to correlate with the different signs of cognitive problems like autism and that, my friends, is a Grand Challenge.
By Igor at 3/30/2005 10:01:00 AM No comments:

Why it is hard to insure wooden houses against fire

I learned something today, while it is known that Pareto's law seems to apply only to the very rich only. (a linear scale instead of a log-log scale can be found here), what is less well known is that there are instances such as occurences of fire in wooden houses that have Pareto distribution with exponents less than one. What it means is that the expectation (average) of this distribution is unknown (since the integral diverges.) What this really means is that it is impossible to insure wooden houses against fire since there is no way to do any statistics on this type of event.....
By Igor at 3/24/2005 04:41:00 PM No comments:

Email ThisBlogThis!Share to TwitterShare to FacebookShare to Pinterest
labels: wow

Peptide identification: Proteomics in the works 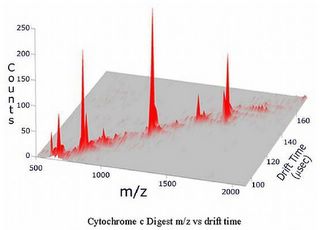 I think I better understand how peptide identification work thanks to this thesis entitled "Development of a MALDI-Ion Mobility-Surface-Induced Dissociation-Time-of-flight-mass spectrometer for the analysis of peptides and proteins" by Earle Stone. The drift time is very well explained in this separation explanation applet.
By Igor at 3/18/2005 11:36:00 AM No comments:

Email ThisBlogThis!Share to TwitterShare to FacebookShare to Pinterest
labels: medical

I just wrote this entry yesterday in our team's blog: How are we going to beat to big guys and win the race. As you can see, It may take me a little longer to update this blog since I want to feature our algorithm advances on the pegasus bridge blog. As you can see, many of the ideas we want to look at in our algorithm have been featured in this blog before.
By Igor at 3/18/2005 08:56:00 AM No comments:

Here is a list of web sites featuring progress of the teams that have entered the DARPA Grand Challenge. Following the idea of John Wiseman, I have tried to find the specific sites in the sites listed on DARPA's web page that feature some type of blog or progress of the team. For every site listed below, I generally picked blogs over news sections. When none were available, I picked the main site. Some news section seemed to be about how the team is portrayed in the media so I picked the main site instead. For a list of videos submitted to DARPA, check the CIMAR web site.

Back in the early 60's, the U.S. considered using plutonium in nuclear power plants in order to achieve a closed fuel cycle. This program was led by the Atomic Energy Commission (the old name for the current Department of Energy) and consisted in having the national labs and industry in reprocessing some of the plutonium that had been produced in nuclear power plants for use as new  fuel as trials in various nuclear power plants. In 1976, Jimmy Carter decided to not continue this program and reprocessing was never used in the nuclear fuel cycle in the U.S. ever since.

In 1994, five years after the end of the Cold War, there was a sentiment expressed collectively by the National Academy of Sciences to the effect that

....With the end of the Cold War, some 50 tons of excess plutonium resulting from the dismantlement of many thousands of nuclear weapons present "a clear and present danger" to international security that must be dealt with promptly?

Not only the U.S. considered their unused weapons plutonium stockpile to be pretty large but they were also "guessing" that Russia had a similar if not larger sotckpile. The "clear and present danger" reflects in part that most people felt that the Russian stockpile was unprotected. and needed to be protected and destroy. An interaction between the two countries ensued at the technical level whereby it was decided to look into the different ways both countries could destroy this excess weapons plutonium in a way that was acceptable by both countries.

Some of the work I was involved in, was in support of this weapons plutonium disposition issue. We went back to the long list of old government reports on some of the 1960's plutonium programs (in particular the Saxton Plutonium Program) and extracted information that would allow us to benchmark the different computational neutronics codes with these past experiments. With Naeem Abdurrahman and Georgeta Radulescu, we eventually published "Benchmark Calculations of the Saxton Plutonium Program Critical Experiments" in Nuclear Technology ( Vol. 127, (3) pp. 315-331, September 1999).
By Igor at 3/14/2005 05:06:00 AM No comments: 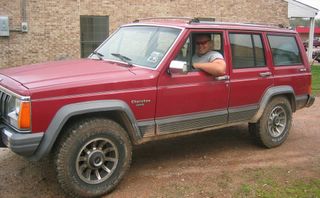 Our entry in to DARPA's Grand Challenge

. This whole thing reminds me of a sentence from a famous speech but that no one remembers because it is too "local" and is often omitted in preference of the next sentence: Why does Rice play Texas ?

There is no strife, no prejudice, no national conflict in outer space as yet. Its hazards are hostile to us all. Its conquest deserves the best of all mankind, and its opportunity for peaceful cooperation may never come again. But why, some say, the moon? Why choose this as our goal? And they may well ask why climb the highest mountain. Why, 35 years ago, fly the Atlantic? Why does Rice play Texas? We choose to go to the moon. We choose to go to the moon in this decade and do the other things, not because they are easy, but because they are hard, because that goal will serve to organize and measure the best of our energies and skills, because that challenge is one that we are willing to accept, one we are unwilling to postpone, and one which we intend to win, and the others, too.

In the EU, the process is more important than the idea

There is an amazing piece of legislation being slipped into europan law right now and it is not because it is a good one. Yet it looks like we are running the risk of having a bad law because the EU does not want to do away with bad processes. The software patent directive has been adopted because

We are adopting the position for institutional reasons so as not to create a precedent which might have a consequence of creating future delays in other processes," the minister said, according to Mueller.

No new power plant for five days of cold.

In this interview, we are being told, it is OK not not have electricity during one of the coldest season on record on the island because the power generated on the island is made out of renewables. And then we are being told that France signed off with the EU to increase its dependence on renewables in the future. This is crazy.
By Igor at 3/02/2005 07:44:00 AM No comments: