You probably recall our interest in imaging some parts of the Fukushima reactor through the robust deconvolution of the film taken by an endoscopic camera inserted in one of the non damaged reactor ? ( Webcam as a radiation sensor (Part3) , Part 2, Part 1.). For the reactors that have been damaged, it is going to take a little while before a camera is inserted anywhere. Cable mentioned to me this recent paper from arxiv where the good folks at Los Alamos are thinking about using muons to image the damaged cores. Their methods seems to go beyond a simple attenuation experiment like the imaging experiment of a Volcano in France as it also used the scattered particles to get a better image. I wonder if some coded aperture could improve some of that imaging (I realize this a low flux problem) 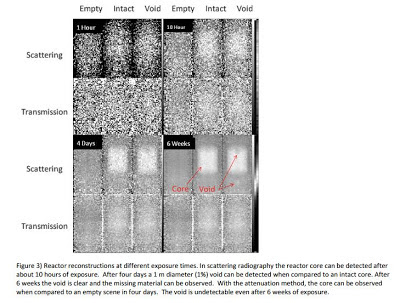 Abstract The passage of muons through matter is dominated by the Coulomb interaction with electrons and nuclei. The interaction with the electrons leads to continuous energy loss and stopping of the muons. The interaction with nuclei leads to angle “diffusion”. Two muon-imaging methods that use flux  attenuation and multiple Coulomb scattering of cosmic-ray muons are being studied as tools for diagnosing the damaged cores of the Fukushima reactors. Here we compare these two methods. We conclude that the scattering method can provide detailed information about the core. Attenuation has low contrast and little sensitivity to the core. 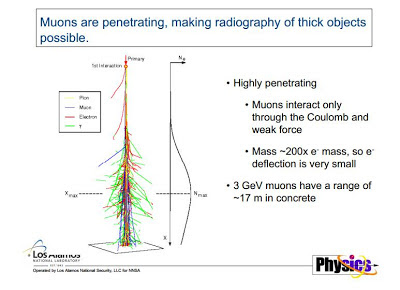 If the attenuation method is so bad, why aren't we using the scattering method for volcanoes ?

Liked this entry ? subscribe to Nuit Blanche's feed, there's more where that came from. You can also subscribe to Nuit Blanche by Email, explore the Big Picture in Compressive Sensing or the Matrix Factorization Jungle and join the conversations on compressive sensing, advanced matrix factorization and calibration issues on Linkedin.
By Igor at 10/15/2012 04:45:00 PM