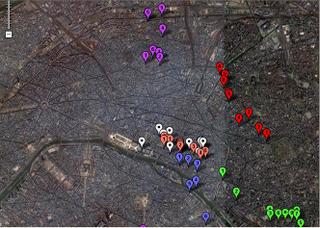 The "Nuit Blanche" event in Paris, is a night sponsored by the local government and industry that features all kinds of artists during the night (from 7 pm till 7 am the next morning.) I just toyed with the Google Maps API and did the following maps of the upcoming Nuit Blanche in Paris (this coming Saturday) for two reasons:

I am pretty sure I got it wrong on the green path though. The light and prefered Google map of the Nuit Blanche in Paris is here. The larger version can be found here (it may crash on you). It takes a while to load but is eventually very addictive. you have been warned.
By Igor at 9/28/2005 11:42:00 AM 1 comment: 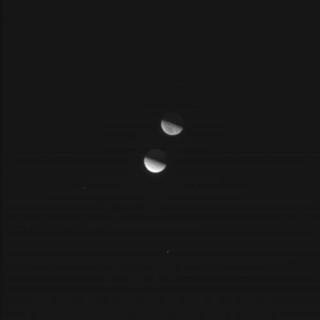 A webcam is installed in the middle of the African desert and you can watch it live. 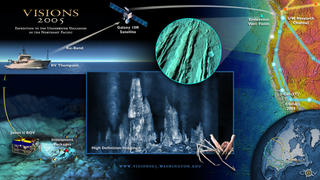 Email ThisBlogThis!Share to TwitterShare to FacebookShare to Pinterest
labels: wow 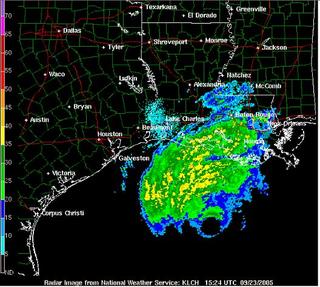 Trapping Rita into a corner ? 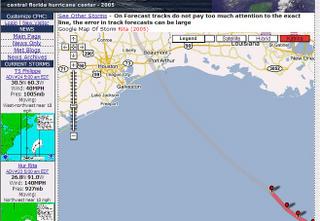 What should we make out of the fact that the strike probability of Rita has moved West ? 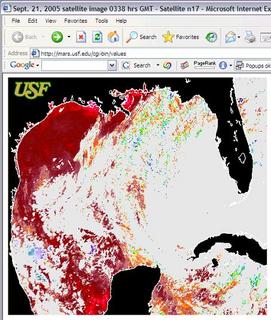 On september 21, warm water was all over the Texas coast. 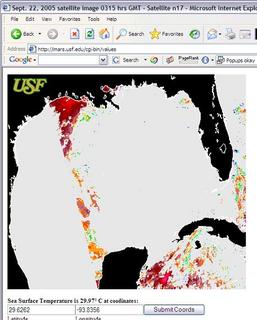 A day later, that warm water has shifted West.
Could it be that because of the evacuation of the population from the coast and Houston in particular, warm water rejected into the river stream (houston channel) and on the coast has decreased to the point where other locations on the coast are warmer ? If this is indeed a possible explanation, it is not the best move to have it hit a part of the coast where most refineries are. 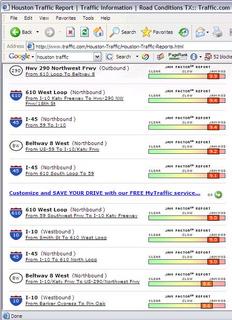 It looks like, there have been only three recorded Category 5 hurricanes before (Labor Day 1935, Camille 1969 and Andrew in 1992) according to NOAA. Traffic reports from Houston at 4:40 AM show most Highways are jammed. In 1900, a Category 4 wiped out Galveston. Sea temperatures for the Gulf show that it is unlikely to decrease in size and strength before it hits the mainland. 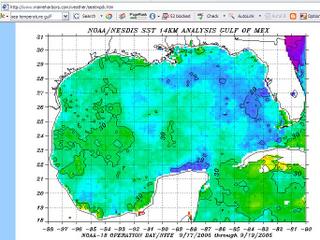 The other benchmark we have for this type of situation in Texas is that of Hurricane Carla in 1961. While in the Gulf it reached Category 5 but hit mainland as a category 3. 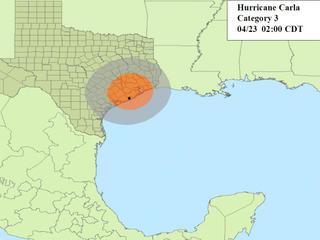 According to the people at the NASA Johnson Space Center (JSC), JSC will be flooded. 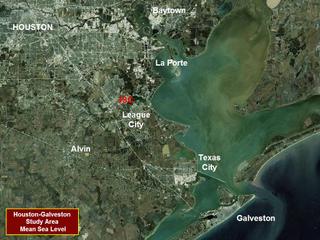 To give an idea of the potential damage, here is the landscape photo of the region before a 22 feet flood (that occured with Carla)... 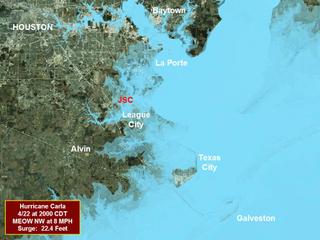 ... and here is the same photographs with a 22 feet flood. 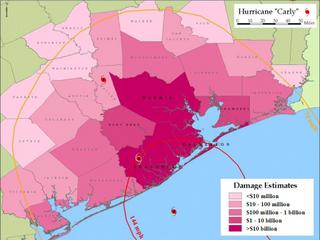 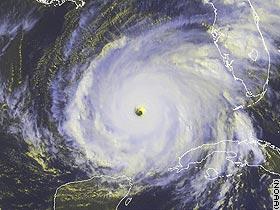 Rita is now a category 5 hurricane. The Gulf of Mexico is very warm. It is supposed to hit south of Houston and then heads its way toward Bryan-College Station. Is it the storm that I mentioned earlier.
By Igor at 9/21/2005 04:00:00 PM No comments:

How many dimensions is a smile worth ?

Echoing a previous story on how bad face recognition algorithms were, it looks like other methods might do the job other than HLLE. 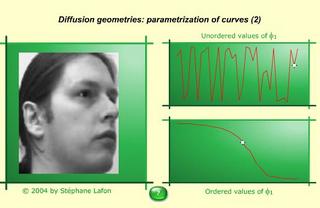 One of them is diffusion geometry. A good demonstration of its power can be found in Stephane Lafon's web page. In this demonstration, one discovers that the suite of images on the left can be put in order following one parameter (rotation angle). So the big question is, how many dimensions would enable the classification of a smile ? This is very important because, for instance, it is known that people affected with autism have difficulty to make emotions out....
By Igor at 9/16/2005 04:18:00 AM No comments:

Following up on detecting very large objects, it looks like

spokes have finally been found on Saturn's rings. They were sought since Voyager took pictures of them 20 years ago. 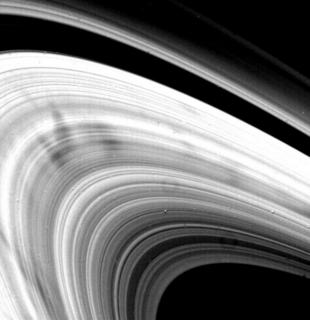 Sensitivity to outliers in Autism 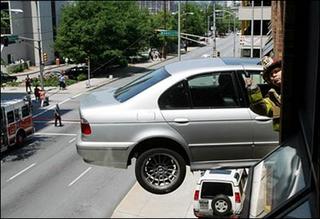 I just found out that somebody had somehow tagged my blog in the social bookmark application del.icio.us under autism. This may be due to the fact that I have written on it in several occasions ( [1] , [2] , [3] )The person who did this is Paul Harrison, so I went to his web page and found a paper he submitted for publication on the theme that Autism is the result of a sensitivity to outliers as discussed in this paper. This is all the more interesting since Wolpert also mentions outliers but in the context of learning sensorimotor functions. An entertaining presentation by Wolpert can be found here (check the Uncertainty on sensorimotor control video.) All this is very uncanny.
By Igor at 9/15/2005 05:34:00 AM No comments:

New Orleans Google Map Before and After Katrina

When hit with a disaster of the importance of Katrina, detailed information is what you want. For every person involved in the catastrophe, there several friends and family who want to know what happened at that location and find out the health of the people impacted. In order to find out about the location, in Katrina's case, people who have left, want to know the state of their belonging. A good idea is to check here and contribute if you have first hand knowledge. For those looking for missing relatives who themselve cannot call you because the cell phones and landlines are dead, here is the place to go ask.
By Igor at 9/01/2005 09:22:00 AM No comments: 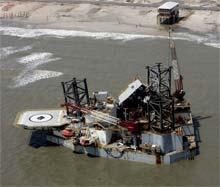 In a previous entry, I mentioned the issue of non-normality and predicting whether or not a Hurricane's path could be predicted accurately enough to allow for the evacuation of a large metropolitan city like New Orleans. Well it looks we are able to really evaluate non-normal strong convective flow behavior, but these computations seldom can evaluate the cost in human life and the triggering effects they produce.

Non-normal perfect storms are where seemingly small unrelated elements join together to produce an expected result in proportions unheard of before, are probably the best way to conceive what is about to happen. So while the destruction and damages of Katrina can be witnessed here (before and after picture - move mouse of images) and while the conditions in New Orleans downtown are downright terrible (people are looting to survive) another major effect is looming: oil crisis. 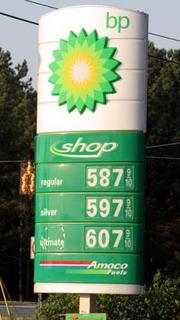 For instance, at $5.87 a gallon, gas prices are the same as in Europe where one forks about 1.1 euros per liter. This photograph above, while not representative of most U.S. current prices yet, tells you that you now have to fork over 1.2 euros per liter in the U.S., more than some place in Europe. This is just unheard of, since up until three to four years ago, gas prices were about one fourth of the U.S.

I am also a big believer of small signs. Just last week, I have seen an astounding three references to the SI unit system on the local TV station. It is probably more comforting to hear that the heat wave is at 34 degrees than 100 degrees ! Also mentioning a distance in kilometers or filling a gas tank with liters instead of gallons makes it likely (because they are smaller) these items will become another way of selling products in the future (the liter was in reference to bottles of Dr. Pepper!).

More recently, the issue of perfect storm was becoming clearer two months ago. With Katrina it becomes crystal clear:

- There is a similar decrease in oil production in the Gulf due to the Hurricane (Ivan's damages),

- there is a rise in foreclosures in Houston

- An oil consultant is thinking, after going through the petroleum engineering literature, that oil estimates in Saudi Arabia cannot be trusted.

- China had an 8.2 % share of global oil consumption last year, and they just have been congratulated by Kazakh officials on the purchase of PetroKazakhstan