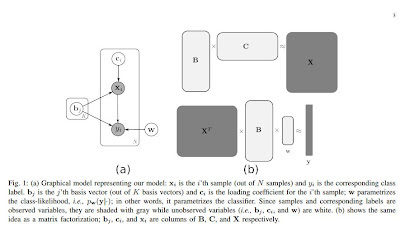 Multi-imaging modalities, Tensors, Group Sparsity, Matrix Factorization, Reconstruiction here is something of note and the future of what we aim for. Kayhan Batmanghelich just sent me the following:


Hi Igor,
.... If you remember, you have featured my paper last year (see email attached below). I finally released the code. It is originally targeted for the medical imaging community but since the source code is available it might be useful for other communities as well:

I am planning to release the next version soon in my website.

Given that our community needs to perform a lot of experiments usually in form of cross-validation MATLAB license could be an issue. Therefore, we develop a framework powered by CMAKE (http://www.cmake.org/) that treats MATLAB code like any other executable; it uses mcc to compile it and make it independent of MATLAB license. It can also take care of dependencies in the same way as CMAKE does. Hence, using this package, one can write a complicated MEX function and calls external C++ libraries and bring the results to MATLAB environment without being worried about complicated dependencies. The package is generally useful for any MATLAB user who is worried about 1) MATLAB licensing issue for large number of paraller, 2) about using external C++ libraries for her MEX file:

If you feel they are relevant to the theme of your blog, I would appreciate if you feature them.
Thanks,
Kayhan


Thanks Kayhan ! From the page:

This software is based on my TMI and MICCAI papers [1] and [2]. The idea is to optimize for the basis images that are clinically interpretable while if we use them to extract features, the resultant features are good for classification too. The method is based on as large-scale constrained matrix factorization and tries to reconstruct the images (generative) while producing good classification (discriminative); hence the name. The software can handle multi-class and unlabeled cases (semi-supervised learning) [3]. (Software website)

Abstract—This paper presents a novel dimensionality reduction method for classiﬁcation in medical imaging. The goal is to transform very high-dimensional input (typically, millions of voxels) to a low-dimensional representation (small number of constructed features) that preserves discriminative signal and
is clinically interpretable. We formulate the task as a constrained optimization problem that combines generative and discriminative objectives and show how to extend it to the semisupervised learning (SSL) setting. We propose a novel largescale algorithm to solve the resulting optimization problem. In the fully supervised case, we demonstrate accuracy rates that are better than or comparable to state-of-the-art algorithms on several datasets while producing a representation of the group difference that is consistent with prior clinical reports. Effectiveness of the proposed algorithm for SSL is evaluated with both benchmark and medical imaging datasets. In the benchmark datasets, the results are better than or comparable to the state-of-the-art methods for SSL. For evaluation of the SSL setting in medical datasets, we use images of subjects with Mild Cognitive Impairment (MCI), which is believed to be a precursor to Alzheimer’s disease (AD), as unlabeled data. AD subjects and Normal Control (NC) subjects are used as labeled data, and we try to predict conversion from MCI to AD on follow-up. The semi-supervised extension of this method not only improves the generalization accuracy for the labeled data (AD/NC) slightly but is also able to predict subjects which are likely to converge to AD.


Abstract. This paper presents a general discriminative dimensionality reduction framework for multi-modal image-based classi cation in medical imaging datasets. The major goal is to use all modalities simultaneously to transform very high dimensional image to a lower dimensional representation in a discriminative way. In addition to being discriminative, the proposed approach has the advantage of being clinically interpretable. We propose a framework based on regularized tensor decomposition. We show that di erent variants of tensor factorization imply various hypothesis about data. Inspired by the idea of multi-view dimensionality reduction in machine learning community, two di fferent kinds of tensor decomposition and their implications are presented. We have validated our method on a multi-modal longitudinal brain imaging study. We compared this method with a publically available classi cation software based on SVM that has shown state-of-the-art classi cation rate in number of publications.

Liked this entry ? subscribe to Nuit Blanche's feed, there's more where that came from. You can also subscribe to Nuit Blanche by Email, explore the Big Picture in Compressive Sensing or the Matrix Factorization Jungle and join the conversations on compressive sensing, advanced matrix factorization and calibration issues on Linkedin.
By Igor at 10/03/2012 05:37:00 AM