New challenges for PET and Cone-Beam CT with hybrid pixels

While CT is covered in the compressive sensing literature, one of the most interesting aspect of CS is how it changes the parameter space especially if there is an improvement in the hardware. The following presentation shows if/how such improvement may be dealt with new techniques emerging out of compressive sensing:
Imaging techniques for LOW-DOSE and COLOR tomography: new challenges for PET and Cone-Beam CT
with hybrid pixels by Yannick Boursier
By Igor at 7/30/2011 12:01:00 AM No comments:

Compressive Sensing in the Skies

Today we have two presentations and one attendant video on the use of compressive sensing in the sky: The first is looking down in  Multi-signal Compressed Sensing for Polarimeric SAR Tomography by Esteban Aguilera, Matteo Nannini, Andreas Reigber 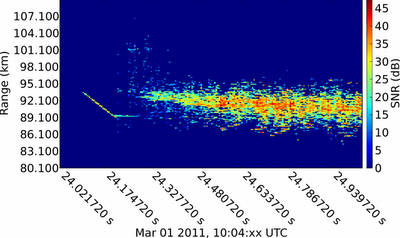 Back on June 6-11th there was a meeting in the south of France loosely translated into Image Processing and Optimization. While the presentations were given in French as well as the title, the slides themselves are in English. Here is the program and here are the presentations related to compressive sensing (all other slides are here) and their presenters:
next meeting of this group will be at IHP at MIA'11.
By Igor at 7/28/2011 12:01:00 AM No comments:

The other day, Cable and I were looking for the PCA of a very large matrix. We compared the randomized approach to a direct one... it was not even funny. After four hours on one of the latest Mac, the direct SVD was still clogging all the processes while I was done in less than 20 seconds on a small PC. Today, the question is, when are we going to have a Random-LAPACK ?

Low-rank matrix approximations, such as the truncated singular value decomposition and the rank-revealing QR decomposition, play a central role in data analysis and scientiﬁc computing. This work surveys and extends recent research which demonstrates that randomization oﬀers a powerful tool for performing low-rank matrix approximation. These techniques exploit modern computational architectures more fully than classical methods and open the possibility of dealing with truly massive data sets. This paper presents a modular framework for constructing randomized algorithms that compute partial matrix decompositions. These methods use random sampling to identify a subspace that captures most of the action of a matrix. The input matrix is then compressed—either explicitly or implicitly—to this subspace, and the reduced matrix is manipulated deterministically to obtain the desired low-rank factorization. In many cases, this approach beats its classical competitors in terms of accuracy, robustness, and/or speed. These claims are supported by extensive numerical experiments and a detailed error analysis. The speciﬁc beneﬁts of randomized techniques depend on the computational environment. Consider the model problem of ﬁnding the k dominant components of the singular value decomposition of an m × n matrix. (i) For a dense input matrix, randomized algorithms require O(mn log(k)) ﬂoating-point operations (ﬂops) in contrast to O(mnk) for classical algorithms. (ii) For a sparse input matrix, the ﬂop count matches classical Krylov subspace methods, but the randomized approach is more robust and can easily be reorganized to exploit multiprocessor architectures. (iii) For a matrix that is too large to ﬁt in fast memory, the randomized techniques require only a constant number of passes over the data, as opposed to O(k) passes for classical algorithms. In fact, it is sometimes possible to perform matrix approximation with a single pass over the data.

The Duke Workshop on Sensing and Analysis of High-Dimensional Data (SAHD) should start in a few hours. Here is the list of abstracts: