This past week, we have had several examples of compressive sensing that used dictionary learning as a means of providing better reconstructions [1,2,3]. This is interesting because these computations get close to the realm of real applications.

As you probably recall, both synthesis- and analysis-based reconstructions yield the same results when the dictionary is a square matrix. On the other hand they provide a different insight in the case of overcomplete dictionaries.

A Detour: The Linear Boltzmann Equation

Back in the day, I used to be interested in the linear transport equation also known as the Linear Boltzmann Equation. That equation is the law of the land for neutrons: Neutron population are used in nuclear reactor cores to enable the criticality of said reactors. In order to  continuously produce thermal energy through the splitting of uranium and plutonium atoms, you have to know neutron population pretty well.

It turns out that the people computing this equation are freaks: They want numerical schemes that can bring 10E-10 accuracy because fluxes are of the order of 10E11 to 10E16 particles per seconds. Radiation protection entails making sure that there are no lost neutrons ( the product of the flux with the accuracy) as they are not good to your health.

In short, since the 1940's a dedicated slew of people have been trying different approaches to solve that equation with a precision that is unheard of in other areas of physics and engineering. All this in the name of shielding us from harmful radiation. This is all good, but why are we having this discussion in the context of synthesis and analysis based reconstructions ? It turns out that the freaks have looked at the Linear Boltzmann Equation through **many** angles. One of these angles is to decompose the flux in some eigenfunctions of the Linear Transport Operator (they are in fact distributions). There are some completude results for 1-D but 2D or 3-D are still really unexplored and not really well understood. Anyway, what was noticed empirically is that solution fluxes always end up following a diffusion equation a few mean free path away from the boundaries or sources. Close to the boundaries or sources, the full transport solution needs those eigendistributions expansions. While you may not care about neutrons, this same equation actually applies to electrons and photons modulo differing scattering kernels.

The crucial insight out of this observation is the following: Photon, electron, neutron distributions follow a diffusive behavior in constant media except close to boundaries or sources where the behavior follows a more complex transport behavior. If your medium is composed of say 15 layers of different media, then the field of photons/electrons/neutrons in that medium will follow different diffusion equations in between the boundaries of these layers and will follow a more complex transport solution very near and at the boundaries of these layers.

Back to the analysis approach

where S is sparse and D is the TV operator. You are, in effect, solving the following problem:

What is the field function that has no gradients except for a few spikes, that is also consistent with the following measurements of that field at different locations Ax = b.

This is all good and fun when the flux does not change over distance in non diffusive media (like photons in air for photography) However, this is just an approximation. Light fields as well as neutron fluxes do change over distance. As mentioned earlier, they mostly follow a diffusion equation most of the time except at the boundaries.

When you learn the analysis operator, instead of postulating the TV norm, you are really asking the following question:

What is the field operator that is also consistent with the following measurements of that field at different locations Ax = b.

When you use that new found dictionary and solve a compressive sensing problem, you are in effect asking  a new question:

The result of the reconstruction using this new learned dictionary will provide a field that is mostly a diffusion solution with some spiky results that fulfill the attendant boundary condition that connects these fluxes across diverse interfaces. The "spikes" will in effect correspond to the non diffusive part of the Linear Boltzmann Equation near the boundary. 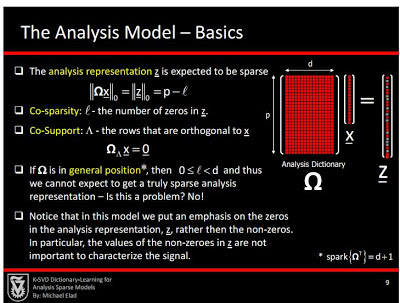 The \Omega operator is a diffusion operator with either a learned diffusion coefficient or a synthetic one. x is the field that is sought after, while the non zeros of z represents the locations where the field does not adhere to the diffusion equation, i.e. fulfill the full transport equation. I wonder if there are many low hanging fruits here. Additional co-sparsity results can be found here.


Tomorrow, there will be an interesting meeting in Rennes where some of these issues on co-sparsity will be covered. and some related thoughts can be found in A Comment on Learning Analysis Operators

Liked this entry ? subscribe to Nuit Blanche's feed, there's more where that came from. You can also subscribe to Nuit Blanche by Email, explore the Big Picture in Compressive Sensing or the Matrix Factorization Jungle and join the conversations on compressive sensing, advanced matrix factorization and calibration issues on Linkedin.
By Igor at 10/13/2012 06:57:00 PM