Burning Both Ends of a Space Candle

A lenticular cloud looks like this. It certainly looks more like this than some restricted area blanking.
By Igor at 5/27/2005 10:40:00 AM No comments:

What is the plague's ping ?

If bacteriums use propellers to move around, wouldn't it be likely that we can detect them (and even differentiate them from each other) by listening to noise induced by the propellers like we do for submarines ?
By Igor at 5/27/2005 10:36:00 AM No comments:

In the Grand Challenge race, one of our approach to make classification of images for the purpose of road following as well as obstacle avoidance is based on defining some type of distance between drivable and non-drivable scenes. There are many different projection techniques available in the literature. Let us take the example of the "zipping-classifier" mechanism and how we are using it for obstacle avoidance. This technique uses a compressor like Winzip or 7-zip to produce some type of distance between files (here images.) A very nice description of it can be read here. The whole theory is based on Minimum Description Length. An example of a naive classification made on pictures we took at the site visit in San Antonio are shown below. In the interest of reproducibility, we used CompLearn to produce this tree. (Rudi Cilibrasi is the developer CompLearn.) The tree clearly allows the segmentation between open areas and the ones with trash cans. We did no processing to the pictures. Obviously, our approach is much more specific in defining this distance between a "good" road and a not-so-good one. 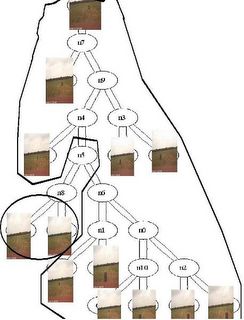 classification of trash can obstacle

Thank you Cable Kurwitz for providing us with the tree.

What a strange cloud !

Who is the piano man ?

if there is one thing to come out of this study on nanotube water (which doesn't freeze - even at hundreds of degrees below zero) is that we don't understand water.
By Igor at 5/16/2005 02:36:00 PM No comments:

Finding your chute when you have already landed, well crashed

GPU and Incomplete Signals that save lives

Well, it looks like it is now possible to reconstruct PET scans with a graphics card as shown by Fang Xu and Klaus Mueller. Now if we could merge this approach with that of Candes, Tao and Romberg (figure 6), I think we are going somewhere.
By Igor at 5/06/2005 10:59:00 AM No comments:

Self serving thoughts or the way of the Lizard ?

When Dan Moniz reports on Paul Graham's talk, he mentions the following tidbit

Graham had gone around to several large tech companies (Google, Yahoo!, Microsoft, etc.) and asked them 'if you could hire someone who had tried and failed to launch a start-up company, or someone who had graduated college and went to go work as a developer at a big company (e.g. Microsoft), which would you prefer?' According to him, every single company responded that they would be more interested in the candidate who had tried and failed at a start-up; he included a verbatim quote from the person he talked to at Yahoo! who said he could quote him.

My experience has mostly been the reverse, but this survey reminds me of how NOT to do a survey. Clotaire Rapaille shows you how to find the inner lizard in all of us (see The science of selling) and how answering such a survey will not give you the right answer. Corporations do not take risks, they prefer youngsters for a reason, their inner lizards tell them so. What do I mean by inner lizard ? Here is an explantion from the persuader's script:

DOUGLAS RUSHKOFF: [voice-over] Of course, it's impossible to know if Rapaille's excursions through the collective unconscious really uncover what drives us, whether to Boeing airplanes or any other product. But even if he is onto something, you have to wonder about the net effect of reducing us to our most primal impulses.

[on camera] What about the environment? If the lizard wants the Hummer–

DOUGLAS RUSHKOFF: –then– and the lizard's not going to listen to the environmentalist–

DOUGLAS RUSHKOFF: –then isn't it our job, as aware people, to get the reptile to shut up and appeal to the cortex, to appeal to the mammal?

CLOTAIRE RAPAILLE: Now, you see, the problem is here, is that, if you think, right, the people who want to do good not always do good, all right? So the people that want to do good – for example, let's say, OK, we need to make smaller cars, right, to protect the environment. Then nobody buys the smaller car. Why? Because they're too small. So then the result is they go into trucks.

DOUGLAS RUSHKOFF: [voice-over] Looks like I'm not going to win this one. After all, it's hard to argue against the reptilian brain.

CLOTAIRE RAPAILLE: We have to understand the unspoken needs of the people. It works. Good marketing research works. When we say it works, it mean that marketers understand the real need of the customers – sometime unspoken – and they deliver. "Give me what I want."

For a corporation, which has processes in place and acting in the status quo and trying to reduce its variation around its normal operation, the "Give me what I want" translates into "Give me youngsters I can impress and mold."
By Igor at 5/04/2005 04:12:00 PM No comments:

I was pleasantly surprised to see how the description of Karl Rove put an emphasis on information mining. It is one thing to gather data, it is a different one to make sense of it. What I want to know is: why does watching CSI make you a republican ?
By Igor at 5/03/2005 04:29:00 AM No comments:

Maybe Eileen Collins is a Roller-Coaster phobic but so are many astronauts. It is well known that many in the astronaut corps do not like to fly inside the KC-135. One of the reason is that space sickness experienced while in orbit has nothing to do with the type of problems one can develop in the KC-135. In effect, it is known that people who are not sick in the plane can become very sick in the space shuttle.
By Igor at 5/01/2005 04:12:00 PM No comments: