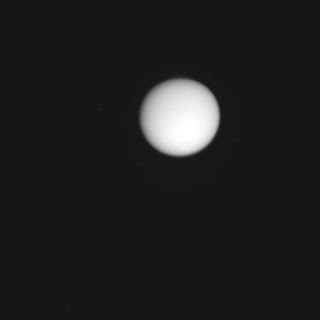 On this day, the Red Sox won the world series after 86 years of unsuccessful attempts, a total Moon eclipse could be seen that night, the Huygens-Cassini probe made the closest ever picture of Titan and Iris was born.
By Igor at 10/27/2004 02:01:00 AM No comments:

Fifth Weightless Wonder to be retired

Have you ever seen an indictement ?

Email ThisBlogThis!Share to TwitterShare to FacebookShare to Pinterest
labels: mishap

Questions you have to ask yourself

At LL2, Todd Proebsting had this very insightful talk on innovation in programming languages. His first slide is about a extract of an orbituary of Hamming

Richard Hamming’s three questions for new hires at Bell Labs:
1- What are you working on?
2- What’s the most important open problem in your area?
3- Why aren’t they the same? (Ouch!)

The whole video of his entertaining but insightful talk is at : http://web.mit.edu/webcast/ailab/mit-ll2-s2-09nov02-80k.ram What is amazing is that his talk can be applied to so many different problems areas not related to programming languages that it really strikes a chord with me. Some of the gems:

It's Bell Labs, we hired you because of your judgement but you are obviously not using your judgement because you are not working on the most important problems in your field

I am glad to hear you're on it

It's almost never a regular expression

Parsing is too hard

You give up, which is what I did

Prolog is fine but it does not solve other problems

Email ThisBlogThis!Share to TwitterShare to FacebookShare to Pinterest
labels: business

While on Earth tornado and hurricane seasons are coming to an end they are still going strong on Mars, Jupiter and Saturn.The sun is calm today.

The company LET IT WAVE is developing a technology close to Curvelets and Contourlets called Bandelets. While the JPEG 2000 standard is an improvement over the current JPEG format, the bandelets seem to be an improvement over JPEG 2000. Here is the same photo truncated to 500 bytes so the information could fit into a bar code

After much time looking into it, we are ready to make this hobby a more serious hobby. I created a blog for our entry into the DARPA Grand Challenge race. Not much detail can be found there because with a small team, we'd rather concentrate on the most important thing, the vehicle and its autonomous driving system. Why Pegasus Bridge ? Because, on all accounts, we don't think we are building a car....
By Igor at 10/13/2004 06:08:00 AM No comments:

It looks like as soon as the thriteenth bar will be implemented, we will be already full and looking to have a fourteenth. Yes, it is not justoil anymore, we now have Peak digit.
By Igor at 10/12/2004 04:25:00 AM No comments:

Have you ever seen a spacecraft being tested ?

Here is one: The ESA Venus Express. The reasons these guys have white gowns and hairnets is because you don't want to contaminate the spacecraft with particulate matters. Since the Venus Express is going to Venus, it is likely to feel very warm since it will be closer to the Sun during its mission. It is therefore imperative that any of the Multi-Layer Insulations cloth and other outside thermal protection materials properties do not degrade because of contamination. Any property changes of the outer layers will directly have an impact on the temperature inside the spacecraft.
By Igor at 10/11/2004 11:35:00 AM No comments:

A Master Builder Passed Away

Max Faget passed away this week-end. Here is a quote I like from what is being said about him:

Seeing things from a different angle was another strength, and he sometimes made dramatic demonstrations of this.

His designs included the escape pod of the Saturn V rocket (the metal tube at the front of this picture is a rocket with three small nozzles) and the wake shield facility,

John Wiseman has three interesting links:Peter Norvig at Web 2.0 on search clustering, Paul Graham on Arc and an older entry on NewLisp. Good stuff.
By Igor at 10/08/2004 03:03:00 AM No comments:

This is the type of news we've not heard about when hurricane Ivan was hitting the Gulf coast. But it looks like seven platforms were detroyed. I just added this information to wikipedia. At $52 a barril, we are approaching a perfect storm. This is noticeable because the actual effect of the destruction of these platforms on the daily consumption in the U.S. is actually very minimal.
By Igor at 10/08/2004 02:03:00 AM No comments: 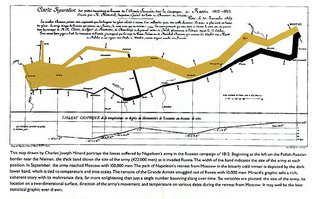 Through the course of learning, one always tries to make sense of the learning material through story-telling or through an obvious internal representation. The a-ha moment is when you realize that you now have found this internal representation... and you can't get it out of your mind. It may be triggered through an awesome graph or a simple key sentence that makes the connection between two dissimilar subjects. Recently, when I was reading the literature on on-line parameter estimation using the Unscented Kalman Filter, I was having problems making a comparison between the unscented transform and previous methods such as the Extended Kalman Filter. 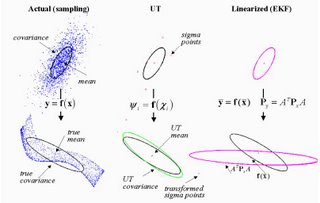 Featured sideways is the graph that explained it all. Similarly, one cannot understand the slaughter of Napoleon's army  during the Russian campaign until ones contemplate this map that connects the thickness of the line with the number of surviving troops. Similar very good examples can be found in this gallery of Data Visualization.
By Igor at 10/07/2004 03:54:00 AM 1 comment:

In this invitation to bid from ESA, they seem to have a need for a way to accelerate thermal testing. In their words,

Modern spacecraft require lightweight solar arrays capable of withstanding either at least a thousand very deep thermal cycles in Geostationary orbit (GEO), or several tens of thousands medium thermal cycles in low earth orbit, or high range temperature thermal cycles for space missions to the sun vicinities (e.g. Bepi Colombo, SOLO, etc.). Extensive tests on solar array samples have to be performed in order to ensure that mission requirements will be met. The objective of the activity is to procure an accelerated thermal cycling facility with the required characteristics to fully cope with the thermal cycling test conditions defined for LEO, GEO and close to the sun missions, with the additional ability of performing short duration cycles, so the testing time for qualification and evaluation programmes can be considerably reduced.


Maybe a way to do this is through better analysis while the testing is being performed ? Maybe an idea would be to allow for the chamber to be intelligent about the actual thermal cycle the payload has to go through ? Imagine that, Intelligent Thermal Vacuum Chambers ...
By Igor at 10/05/2004 04:24:00 AM No comments:

Just make it driverless. A more accurate analysis can be found in this document relating Terramax's entry into DARPA grand challenge of last year.
By Igor at 10/05/2004 04:17:00 AM No comments:

Nice little exercise to go from sensor reading to a GUI

The NOAA-N-Prime satellite mishap investigation report has been released. This is a follow-up of this entry. Please note the following in the report:

Errors were made by other team members, who were narrowly focused on their individual tasks and did not notice or consider the state of hardware or the operation outside of those tasks


In my view, the conclusion of the report points to one thing, no matter how many "Q/A" people you have on-board, if the organizational structure is not working, then you cannot expect a Quality Band aid program to help in anyway.

In "Eoliennes", there is a mention of wind turbine failures given as a very low probability by experts when, in fact in the course of four months, two have been destroyed (because of the wind!) What is fascinating is that with the increase in power ratings of wind turbines, we are likely to see these probabilities even go up. Indeed, three hundred of these turbines could replace one nuclear power plant. This is not to say that electricity would be cheaper (currently the wind power industry is subsidized by the government) nor that it would help France in fulfilling Kyoto's treaty CO2 levels promises since both energy sources do not produce any.

"La théorie n'est pas au point" mirrors my previous comment on orders of magnitude in the prediction business when it comes to the environment.

In "Identification", there is a mention made of the fiasco in using biometrics issues when it comes to identifying people and that smell may actually be a better classifier than face recognition. This is a good idea, as it stands, dog smell is already looked at to detect some cancers. Smell might actually be a better detector of intent than the currently flawed idea that databases are going to protect us. As a traveler, do I care more about a seating next to

The database says 1. I say 2. In a related news, Smell study has netted some researchers the Nobel prize today.


The rest of this september issue of the SCM Letter is a very good and entertaining read (if you read french that is.)