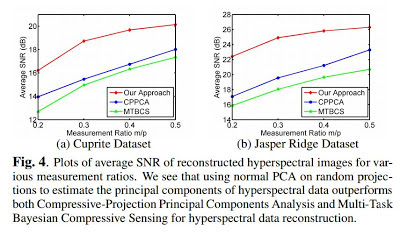 I have featured their work recently in From Compressive Sensing to Machine Learning, here is another set of interesting papers: Invariance of Principal Components under Low-Dimensional Random Projection of the Data by Hanchao Qi, Shannon M. Hughes. The abstract reads:

I wonder how this is going to fit into the generic RandNLA movement.

In this technical report, we will make two observations concerning symmetries of the probability distribution resulting from projection of a piece of p-dimensional data onto a random m-dimensional subspace of $\mathbb{R}^p$, where m < p. In particular, we shall observe that such distributions are unchanged by reflection across the original data vector and by rotation about the original data vector

Liked this entry ? subscribe to Nuit Blanche's feed, there's more where that came from. You can also subscribe to Nuit Blanche by Email, explore the Big Picture in Compressive Sensing or the Matrix Factorization Jungle and join the conversations on compressive sensing, advanced matrix factorization and calibration issues on Linkedin.
By Igor at 10/12/2012 03:39:00 AM