Beyond Overfitting and Beyond Silicon: The double descent curve


We recently tried a small experiment with LightOn's Optical Processing Unit on the issue of generalization. Our engineer, Alessandro Cappelli, did the experiment and wrote a blog post on it and it is here: Beyond Overfitting and Beyond Silicon: The double descent curve 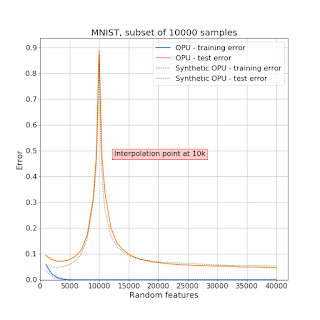 Two days ago, Becca Willett was talking on the same subject at the Turing Institute in London.

A key element of understanding the efficacy of overparameterized neural networks is characterizing how they represent functions as the number of weights in the network approaches infinity. In this paper, we characterize the norm required to realize a function  as a single hidden-layer ReLU network with an unbounded number of units (infinite width), but where the Euclidean norm of the weights is bounded, including precisely characterizing which functions can be realized with finite norm. This was settled for univariate univariate functions in Savarese et al. (2019), where it was shown that the required norm is determined by the L1-norm of the second derivative of the function. We extend the characterization to multivariate functions (i.e., networks with d input units), relating the required norm to the L1-norm of the Radon transform of a (d+1)/2-power Laplacian of the function. This characterization allows us to show that all functions in Sobolev spaces , , can be represented with bounded norm, to calculate the required norm for several specific functions, and to obtain a depth separation result. These results have important implications for understanding generalization performance and the distinction between neural networks and more traditional kernel learning.

Other links:
Paris Machine Learning: Meetup.com||@Archives||LinkedIn||Facebook|| @ParisMLGroup< br/> About LightOn: Newsletter ||@LightOnIO|| on LinkedIn || on CrunchBase || our Blog
About myself: LightOn || Google Scholar || LinkedIn ||@IgorCarron ||Homepage||ArXiv
By Igor at 1/15/2020 05:11:00 AM No comments: