The blog for the GeoCam Imager is up and can be found here. Here is the most recent photo of it in its casing. 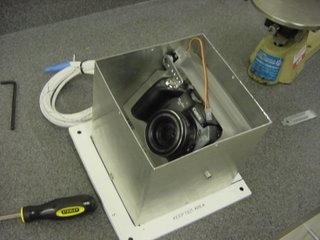 The whole reason as to why we think this off-the-shelf camera is a good idea is explained here.

Fabricating elements around current high end consumer digital cameras (like the clicker) is the most effective way of utilizing advances in digital camera development. We intend on showing how we did all this on sites like Hackaday. Thank you to the HASP program at LSU for giving us a seat in the High Altitude Student Platform (HASP).
By Igor at 7/26/2006 05:00:00 AM No comments: 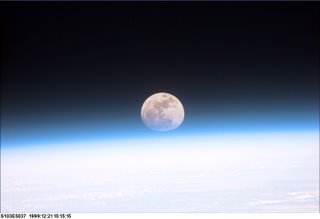 I mentionned before the fact that multitaskers could not be more efficient than single minded people because there was a cognitive cost associated with having to upload their memory of the previous tasks. In a remarkable study, Gloria Mark goes farther and notes:

What we found is that the average amount of time that people spent on any single event before being interrupted or before switching was about three minutes. Actually, three minutes and five seconds, on average. That does not include formal meetings, because we figured if they were in a formal meeting, they were prisoners at the meeting, right? They couldn't leave or switch activities. So we didn't count that. Then we looked at [use of] devices, working on a PC, the desk phone, using any kind of paper document, using a cell phone. We found the average amount of time that people spent working on a device before switching was 2 minutes and 11 seconds.

But we called it a "working sphere" because "project" has a limited connotation, and a working sphere is a broader idea. Anything where there's a common goal, there's a certain group of people involved with it, there are certain resources attached to it, it has its own time framework and its own deadline, is a working sphere

So even when we took out what we call "non-significant" interruptions, we find that people still worked 12 minutes and 18 seconds in a working sphere before switching.

GMJ: How long does it take to get back to work after an interruption?

But the bad news is, when you're interrupted, you don't immediately go back to the task you were doing before you were interrupted. There are about two intervening tasks before you go back to your original task, so it takes more effort to reorient back to the original task. Also, interruptions change the physical environment. For example, someone has asked you for information and you have opened new windows on your desktop, or people have given you papers that are now arranged on your desk. So often the physical layout of your environment has changed, and it's harder to reconstruct where you were. So there's a cognitive cost to an interruption.

The designers of a task manager for a small business could learn a lot from these results. For instance, in my case, the application we developed at my workplace was aimed at handling the communication load of about 60 people with many different schedules, projects and from different functional groups. After some time, we noticed certain behaviors. First, we found out that if the application was not used by everybody uniformly, sooner rather than later, an assymetry of the information stream helped people who were least likely to contribute/use the system. In effect, cooperation between users was less effective over time. The second finding was a little more subtle. The application was written in PHP but did not use AJAX. Every time the page would load with new information, it took the new page about 10 seconds to refresh. In light of the study by Mark, it seems that this is enough of a burden that this cost of "waiting" for the refresh would have people drift into other applications and other "working spheres". For participants, the time spent in updating knowledge in the application felt like "feeding the beast" as opposed to being part of a normal cognitive process.
By Igor at 7/04/2006 05:27:00 AM No comments: