Nothing short of a revolution. Part I: When a scam can kill you 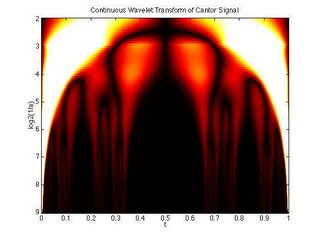 This story is about the revolution brought about by compressed sensing or compressive sampling. It is a beautiful story as far as I can tell and I will try to parse it in three or four parts. I write it as an outsider and I therefore hope to be forgiven if I missing names.

It all started with the (re)discovery of wavelets by Jean Morlet and the work of people like Alex Grossman. The field was expanded by people like Yves Meyer, Stephane Mallat, Ingrid Daubechies and many others. As pointed out in the text about Jean Morlet, it all started badly:

...Until now, his only reward for years of perseverance and creativity in producing this extraordinary tool was an early retirement from Elf...

Elf was not fearing knowledge or fearing to be more competitive but rather the company had been hit with a scandal that nearly shattered a government and a presidency. The avions renifleurs affair (sniffer planes) made most of the management at ELF very cautious/squeamish about any type of extraordinary scientific announcement. So when Morlet came in and told people about wavelets, they had him retire. While the story is cute, it took a good ten years before wavelets became of interest in the generic engineering literature.

As an engineer myself, the turning point for making these functions useful was when Dave Donoho started to make available a series of routines on the internet so that other researchers could reproduce his own published material (David Donoho wants his research to be reproducible because he thinks that publication is not scholarship but merely an advertisement for it). The Wavelab toolbox was revolutionary because, in effect, since most of these wavelet functions were not analytic (they are mostly defined as a solution to a recurence relation) most engineers had to first build something to get to see a "wavelet" function. And while there were wavelets built from spline functions by Chui, Goswami and Chan these never really took off in the literature. Wavelets are now routinely used in every areas of engineering and have joined Fourier analysis in the series of tools engineers and scientists use in their daily lives. They have changed the face of applied harmonic analysis and change our ways we look at signals such as image, voice, etc. However, the revolution only starts here. The bigger boom came from another area of mathematics...
By Igor at 12/29/2006 04:43:00 AM No comments:

Reflecting on a moving view 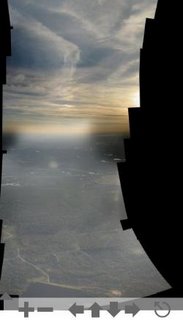 I recently flew on a small shuttle plane between College Station and Houston and wanted to see what the view looked like in a panorama. Stitching several photos together using Autopano Pro, this is what I eventually saw from 4,000 feet. This is a little bit different than say 112,000 feet since the angle to the scence of interest makes it difficult to patch images together. When the camera is close to the land, the movement of the plane changes quite rapidily the angle to the scene and it then becomes difficult for the software to patch images together. 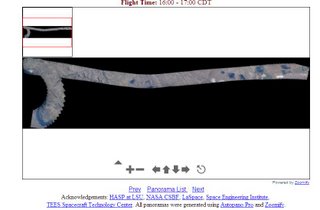 Since I last wrote about thought compression, the Hutter prize was launched and somebody has already found a way to earn part of that prize. The concept is to find a compression algorithm that compresses a 100 MB from Wikipedia in a lossless fashion to less than 17 MB. 17 MB is the benchmark value for the best "dumb" compressors like zip...The idea is that using relationships between words, one is very likely to be able to compress further a text as opposed to relying on a smart but really dumb way of compressing words of a dictionary based on the frequency use. In the end, the sense is that artificial intelligence can benefit from this because it would permit the "comparison" between statements using distances such as the ones devised by Rudi Cilibrasi.

While compressing text is fine, another area of compression still impresses me. The use of a very expressive programming language that nearly reads like pseudo-code. Python continues on providing examples as to why it falls in this category of expressive languages. For instance, the p2p example was nice but others are similarly intriguing like:

- Autonomous car programming in the past and in the present.

The MCMC code one is more intriguing than anything else. Because of their ability to compute multidimensional integrals, MCMC methods have allowed the use of Bayesian statistics and Bayesian programming in problems of inferences, a hallmark of artificial intelligence that the Hutter prize is seeking to enable.
By Igor at 12/20/2006 03:31:00 AM No comments:

A recent study shows that Diabetes seems to be linked to the nervous system. This is indeed a surprise. However, the most surprising fact is that it was not discovered earlier as it is known that mental illness is linked to diabetes. More specifically, according to several studies dating back fifty years ago we could see the following :

... based on a retrospective review of medical data for 569 randomly selected patients with the two disorders admitted to a state psychiatric hospital between 1940 and 1950—before antipsychotic medications were available-found that metabolic disturbances were significantly greater in those patients than among the general population...