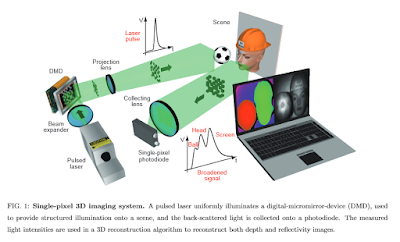 Time-of-flight three dimensional imaging is an important tool for many applications, such as object recognition and remote sensing. Unlike conventional imaging approach using pixelated detector array, single-pixel imaging based on projected patterns, such as Hadamard patterns, utilises an alternative strategy to acquire information with sampling basis. Here we show a modified single-pixel camera using a pulsed illumination source and a high-speed photodiode, capable of reconstructing 128x128 pixel resolution 3D scenes to an accuracy of ~3 mm at a range of ~5 m. Furthermore, we demonstrate continuous real-time 3D video with a frame-rate up to 12 Hz. The simplicity of the system hardware could enable low-cost 3D imaging devices for precision ranging at wavelengths beyond the visible spectrum. 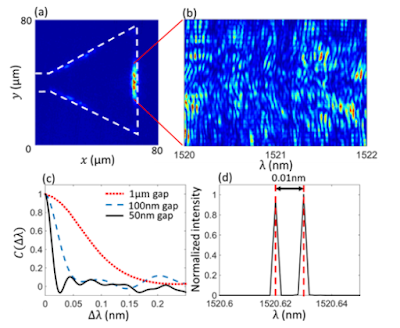 We designed an on-chip spectrometer based on an evanescently-coupled multimode spiral waveguide. Interference between the modes in the waveguide forms a wavelength-dependent speckle pattern which can be used as a fingerprint to identify the input wavelength after calibration. Evanescent coupling between neighboring arms of the spiral enhances the temporal spread of light propagating through the spiral, leading to a dramatic increase in the spectral resolution. Experimentally, we demonstrated that a 250 {\mu}m radius spiral spectrometer provides a resolution of 0.01 nm at a wavelength of 1520 nm. Spectra containing 40 independent spectral channels can be recovered simultaneously and the operation bandwidth can be increased further when measuring sparse spectra.