While empirical evidence is great, we all yearn to have a disciplined approach to some of the most recent results in Machine Learning. The next two papers are instances of providing a Framework on how to go conceptually from things we know theoretically to things that seem to work well. The first paper is about Kernel Machines using L1 regularization while the second is about the convexity of Neural Networks, an important property as has been shown in compressive sensing. 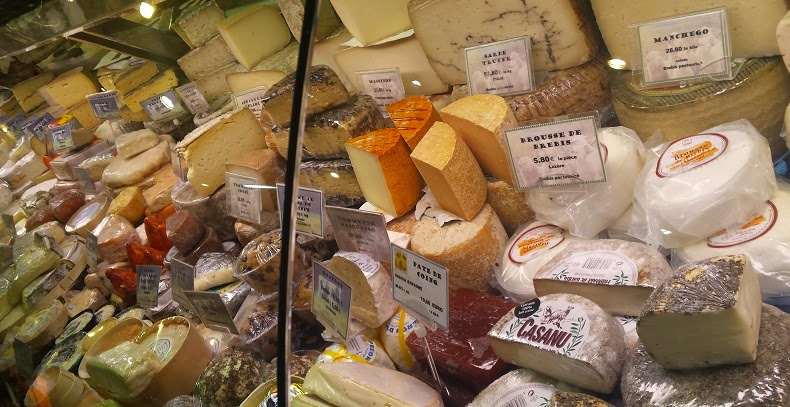 Different cheese and an artificial line separating them....

Here are two papers that are showing us how theory is trying to catch up with empirically successful approaches.
We recently saw Fredholm Kernels do semi supervised Learning (i.e. taking into account the distrbution of the set of elements for which we do not have a corresponding sample to learn from), but we also had recently Sparse Random Features for Learning whereby an L1 solver is used to get components of a kernel machine. This last bit is kind of difficult to explain within the Hilbert Space Framework because it really is a Banach space. The earlier paper showed there was a good reason to investigate it, here is the more theoretical approach to it. How is the B going to change the food flavored solvers (Random Kitchen Sinks, FastFood, Deep Fried Convnets...) ? only time will tell.
Constructions of Reproducing Kernel Banach Spaces via Generalized Mercer Kernels by Yuesheng Xu, Qi Ye

In a different direction, we featured the slides earlier here, here is the attendant paper: 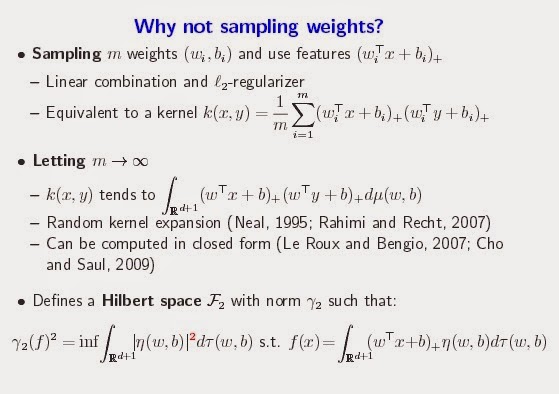 
We consider neural networks with a single hidden layer and non-decreasing homogeneous activation functions like the rectified linear units. By letting the number of hidden units grow unbounded and using classical non-Euclidean regularization tools on the output weights, we provide a detailed theoretical analysis of their generalization performance, with a study of both the approximation and the estimation errors. We show in particular that they are adaptive to unknown underlying linear structures, such as the dependence on the projection of the input variables onto a low-dimensional subspace. Moreover, when using sparsity-inducing norms on the input weights, we show that high-dimensional non-linear variable selection may be achieved, without any strong assumption regarding the data and with a total number of variables potentially exponential in the number of ob-servations. In addition, we provide a simple geometric interpretation to the non-convex problem of addition of a new unit, which is the core potentially hard computational element in the framework of learning from continuously many basis functions. We provide simple conditions for convex relaxations to achieve the same generalization error bounds, even when constant-factor approxi-mations cannot be found (e.g., because it is NP-hard such as for the zero-homogeneous activation function). We were not able to find strong enough convex relaxations and leave open the existence or non-existence of polynomial-time algorithms.