One must imagine Charlie happy 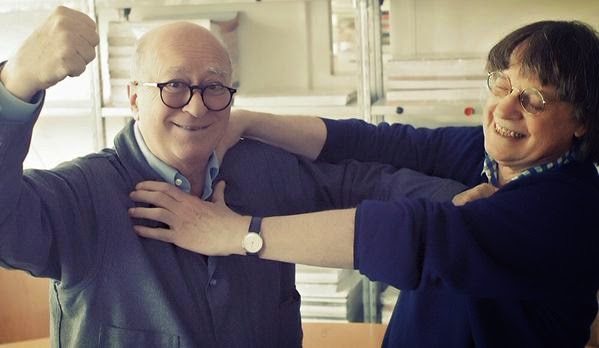 I can safely say that most French people are extremely sad because, over the years, these cartoonists have been indiscriminate in taking down the powerful of all kinds. Here is another aspect of this which has not translated well in the foreign press coverage. Some figures, like Cabu, "raised" us during our childhood by being the friendly cartoonist-patient adult figure we would look up to every Wednesday afternoons on a kid TV show. For U.S. folks, think a Mr. Rogers like figure, for others Big Birdie might fit the bill.

In a way, and I think this crosses over to many cultures*, some of these figures at Charlie were our collective "crazy uncles". You know, the family member that you get to see every once in a while at family gatherings and who will have widely different views than the general consensus you are accustomed to around your parents. Your inner kid knows they mean well. Yet, their views creates an element of tension, sometimes it's simply unbearable, sometimes it is filled with laughters. Most of us remember these cringeworthy moments fondly. As a kid, these encounters will be your first exposure to criticism in a safe environment: you will learn tremendously from only the few hours of exposure to them. Over the course of your childhood, you will meet again, and over time, learn how to deal and argue with the uncomfortable ideas of the "crazy uncle". Eventually, the adult and citizen you have become, will realize how much you owe them. Whether you like it or not, whether they are still around, they are part of you. They are part of us.
At this point, Camus' Sisyphus words of conclusion feel very apt "Cet univers désormais sans maître ne lui paraît ni stérile ni futile. Chacun des grains de cette pierre, chaque éclat minéral de cette montagne pleine de nuit, à lui seul, forme un monde. La lutte elle-même vers les sommets suffit à remplir un cœur d'homme. Il faut imaginer Sisyphe heureux"**.
Indeed, one must imagine Charlie happy.
* which is why many people I know find the muslim angle irrelevant.
** " This universe henceforth without a master seems to him neither sterile nor futile. Each atom of that stone, each mineral flake of that night-filled mountain, in itself forms a world. The struggle itself toward the heights is enough to fill a man's heart. One must imagine Sisyphus happy."
Join the CompressiveSensing subreddit or the Google+ Community and post there !

So they killed Big Bird and took Ernie and Burt hostage. Here's a link to a Canadian newspaper with many Charlie Hebdo cartoons: http://news.nationalpost.com/2015/01/07/editorial-cartoonists-around-the-world-mourn-slain-charlie-hebdo-journalists-with-their-pens/

Nice article. It's true it's a complex equation with many parameters to which there isn't only one solution.

This is my exact feeling. Thanks for putting it into words. Camus's citation is a propos. Thanks.