Videos are fourth order tensors that have much information. The following paper shows how much of it through Low rank Tensor reconstruction. Woohoo ! 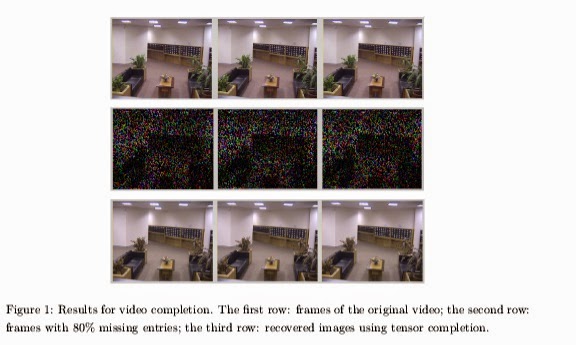 In this paper, we propose three new tensor decompositions for even-order tensors corresponding respectively to the rank-one decompositions of some unfolded matrices. Consequently such new decompositions lead to three new notions of (even-order) tensor ranks, to be called the M-rank, the symmetric M-rank, and the strongly symmetric M-rank in this paper. We discuss the bounds between these new tensor ranks and the CP(CANDECOMP/PARAFAC)-rank and the symmetric CP-rank of an even-order tensor. In particular, we show: (1) these newly defined ranks actually coincide with each other if the even-order tensor in question is super-symmetric; (2) the CP-rank and symmetric CP-rank for a fourth-order tensor can be both lower and upper bounded (up to a constant factor) by the corresponding M-rank. Since the M-rank is much easier to compute than the CP-rank, we can replace the CP-rank by the M-rank in the low-CP-rank tensor recovery model. Numerical results on both synthetic data and real data from colored video completion and decomposition problems show that the M-rank is indeed an effective and easy computable approximation of the CP-rank in the context of low-rank tensor recovery.