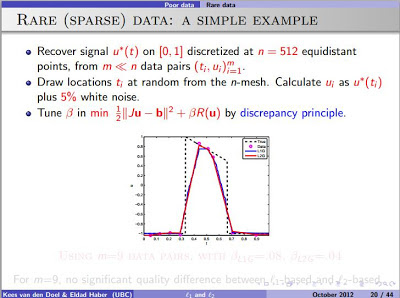 In most cases of interest, the answer is no as shown in The Lost Honour of ℓ2-Based Regularization by Uri Ascher. Similar questions were answered negatively before in :

There seems to be some confusion: compressive sensing has never been an interpolation or inpainting issue. Even the type of sparse sampling used in compressive sensing covers and oversamples all the data. This reminds me of a question asked by Inspector Clouzeau "Does your dog bite ?"....

Thanks Laurent for the heads-up.

Liked this entry ? subscribe to Nuit Blanche's feed, there's more where that came from. You can also subscribe to Nuit Blanche by Email, explore the Big Picture in Compressive Sensing or the Matrix Factorization Jungle and join the conversations on compressive sensing, advanced matrix factorization and calibration issues on Linkedin.
By Igor at 12/09/2012 11:38:00 AM

I don't understand your point. My efforts were to compare CS super-resolution on a low resolution focal plane array with what one can achieve with standard techniques (eg. bicubic interpolation) on an intensity image with the same low resolution FPA. What am I missing?

In the experiment you did with the solver of Krzakala et al, it was obvious that when reconstructing an initally exactly sparse solution you could reconsruct it very nicely( in that case you had to threhold the image first). If on the other hand one had to reconstruct an image from a non sparse but compressible solution, then the result would not be optimal compared to the interpolation approach.

The series expansion of the image is truncated in the former case whereas it is not in the latter. The inpainting I am refering to is the act of trying to reconstruct a good image (the full compressible version) using only the information provided in the thresholded version of that same image.

Does that make sense ?