These Technologies Do Not Exist: Closed-Loop Inertial Confinement Fusion

As some of you may know, the holy grail in energy engineering is the possibility of producing nuclear fusion. There are several strategies developed to get there but every time I check, the time estimates for the maturation of any of these technologies is always 50 years out in the future. Where is my flying car ? you say.

One of the ways to produce thermonuclear fusion is to fire large lasers onto small round pellets in a technology called Inertial Confinement Fusion or ICF. A good explanation is given in the wikipedia entry (go read it, I'll wait): 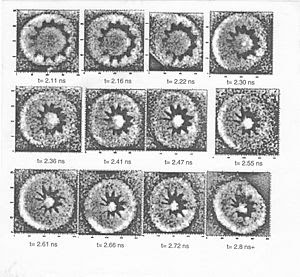 Let us note that the whole series of 12 photographs shown above were taken in less than 0.8 ns, that's less than 8 x10^(-10) seconds or 800 picoseconds. In effect, it is equivalent to a distance of 24 cm traveled by a photon at the speed of light.

The whole field of inquiry is somewhat sensitive because as you know there are weapons that rely on similar technology. In weapons however, the whole process is pretty much uncontrolled whereas using ICF for energy generation purposes, one would want to control the process in a finer fashion. Over the past few years, the amount of control has progressed albeit too crudely for my taste. The intent of this control is to reduce the different interface instabilities (Rayleigh-Taylor (RT), Kelvin-Helmholtz (KH),...) so that the spherical pellet compresses the hydrogen elements, located inside, in some uniform fashion (eventually yielding a fusion reaction). To get an idea of what some of these controlling mechanisms are, check for instance page 161 of An introduction to inertial confinement fusion by Susanne Pfalzner :

....However, the right choice of R/Delta_R is not the only option to stabilize the implosion: it is also possible to direct instabilities into a regime in which the density gradients are longer than the instability wavelength. If this can be achieved the instabilities are less damaging for the compression process. In fact, the most serious instabilities occur at wavelength comparable to the shell thickness, and these have to be avoided above all else (see section 6.1).

The growth rate of instabilities can also be reduced by so called adiabat shaping. Here the adiabat of the shell is increased at the ablation surface, resulting in a higher implosion velocity and a reduced instability growth rate \gamma. The growth rate is kept low in the inner portion of the shell so maintaining the compressibility of the target and maximizing the yield (Goncharvo et al, 2003). This shaping of the adiabat can be achieved in two ways: either a short (~100 ps) picket pulse creating an unsupported shock in the shell or by relaxing the shell density with a weak prepulse followed by a power shut-off before the main pulse (Andre and Betti, 2004). Figure 8.4 shows how adiabat shaping can reduce the occurance of RT instabilities. 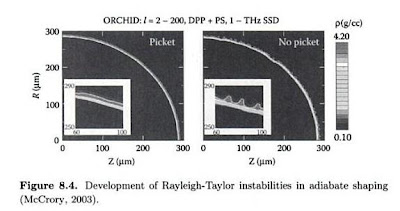 From [1], the power diagram of the adiabat shaping follows this profile: 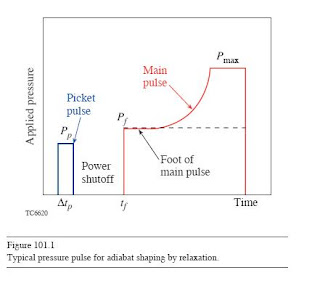 Researchers are currently imaging these reactions with 1 nanosecond film exposure [2]. The simple idea exposed below must have been thought by the folks looking at these things but in light of the advances in the fields covered by Nuit Blanche, namely compressive sensing, machine learning and a few others fields, let me summarize the "new tools that can be used to look at those problems with a new thinking:


Given all this, there has to be a way to shape more efficiently the adiabat shaping process through the data mining of the current large database of results. Furthermore, if radiation sensors are close enough to the target and have the ability to somehow re-shape (modulate) in real time the laser beam, one could potentially achieve a closed loop inertial device. I am far from being a specialist in this area, but I think it's worth looking into it with a new eye.

Other Technologies That Do Not Exist are listed here.

Reference:
[1] Pulse Design for Relaxation Adiabat-Shaped Targets in Inertial Fusion Implosions
[2] From "Observation of a Kelvin-Helmholtz Instability in a High-Energy-Density Plasma on the Omega Laser"


The vanadium x rays passed through the target, were differentially absorbed by the
various target materials, and then were incident on a single piece Agfa D7 film, which was later digitized. The film was exposed for ~ 1 ns (the approximate temporal duration of the x ray emission), so motion blurring of the blast wave should be detectable given that the resolution element is between 20 and 35 μm, as set by the pinhole size.

Email ThisBlogThis!Share to TwitterShare to FacebookShare to Pinterest
labels: These Technologies Do Not Exist