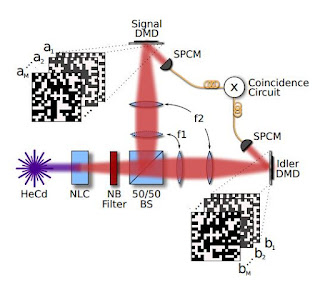 Looks like every end of the year period brings pre-prints and papers on computational ghost imaging. 2012 is no different. Let us remind our readers this awesome 2cm resolution at 1km range Ghost Imaging LIDAR. It's been three years since the first paper on the subject came out :). I note that the first paper of the list uses compressive sensing for the same reasons compressive sensing is contemplated for coded aperture imaging, namely the higher flux per shot and the reduced number of measurements overall.

We implement a double-pixel, compressive sensing camera to efficiently characterize, at high resolution, the spatially entangled fields produced by spontaneous parametric downconversion. This technique leverages sparsity in spatial correlations between entangled photons to improve acquisition times over raster-scanning by a scaling factor up to n^2/log(n) for n-dimensional images. We image at resolutions up to 1024 dimensions per detector and demonstrate a channel capacity of 8.4 bits per photon. By comparing the classical mutual information in conjugate bases, we violate an entropic Einstein-Podolsky-Rosen separability criterion for all measured resolutions. More broadly, our result indicates compressive sensing can be especially effective for higher-order measurements on correlated systems.

Correlated-photon imaging, popularly known as ghost imaging, is a technique whereby an image is formed from light that has never interacted with the object. In ghost imaging experiments two correlated light fields are produced. One of these fields illuminates the object, and the other field is measured by a spatially resolving detector. In the quantum regime these correlated light fields entail entangled photons produced by spontaneous parametric down-conversion. To date, all correlated-photon ghost-imaging experiments have scanned a single-pixel detector through the field of view to obtain the spatial information. However, scanning leads to a poor sampling efficiency, which becomes worse as the number of pixels N in the image is increased. In this work we overcome such limitations by using a time-gated camera to record the single-photon events across the full scene. We produce high-contrast images in either the image plane or far-field of the down-conversion source, taking advantage of the EPR-like correlations in position and momentum of the photon pairs. Our images contain a large number of pixels, creating opportunities in low-light-level, high-resolution imaging and in quantum information processing.

Ghost imaging has been receiving increasing interest for possible use as a remote-sensing system. There has been little comparison, however, between ghost imaging and the imaging laser radars with which it would be competing. Toward that end, this paper presents a performance comparison between a pulsed, computational ghost imager and a pulsed, floodlight-illumination imaging laser radar. Both are considered for range-resolving (3D) imaging of a collection of rough-surfaced objects at standoff ranges in the presence of atmospheric turbulence. Their spatial resolutions and signal-to-noise ratios are evaluated as functions of the system parameters, and these results are used to assess each system's performance trade-offs. Scenarios in which a reflective ghost-imaging system has advantages over a laser radar are identified.

The light produced by parametric down-conversion shows strong spatial entanglement that leads to violations of EPR criteria for separability. Historically, such studies have been performed by scanning a single-element, single-photon detector across a detection plane. Here we show that modern electron-multiplying charge-coupled device cameras can measure correlations in both position and momentum across a multi-pixel field of view. This capability allows us to observe entanglement of around 2,500 spatial states and demonstrate Einstein-Podolsky-Rosen type correlations by more than two orders of magnitude. More generally, our work shows that cameras can lead to important new capabilities in quantum optics and quantum information science.

Liked this entry ? subscribe to Nuit Blanche's feed, there's more where that came from. You can also subscribe to Nuit Blanche by Email, explore the Big Picture in Compressive Sensing or the Matrix Factorization Jungle and join the conversations on compressive sensing, advanced matrix factorization and calibration issues on Linkedin.
By Igor at 12/26/2012 08:50:00 AM