So 1 bit quantization is not enough for augmented reality 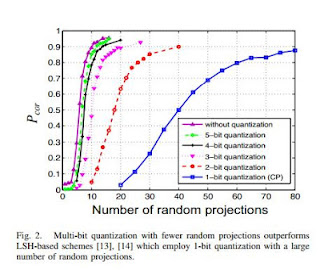 Randomized embeddings of scale-invariant image features are proposed for retrieval of object-specific meta data in an augmented reality application. The method extracts scale invariant features from a query image, computes a small number of quantized random projections of these features, and sends them to a database server. The server performs a nearest neighbor search in the space of the random projections and returns meta-data corresponding to the query image. Prior work has shown that binary embeddings of image features enable efficient image retrieval. This paper generalizes the prior art by characterizing the tradeoff between the number of random projections and the number of bits used to represent each projection. The theoretical results suggest a bit allocation scheme under a total bit rate constraint: It is often advisable to spend bits on a small number of finely quantized random measurements rather than on a large number of coarsely quantized random measurements. This theoretical result is corroborated via experimental study of the above tradeoff using the ZuBuD database. The proposed scheme achieves a retrieval accuracy up to 94% while requiring the mobile device to transmit only 2.5 kB to the database server, a significant improvement over 1-bit quantization schemes reported in prior art.

but it may be good enough for testing MEMS ?

While the characteristic dimensions of electronic systems scale down to micro- or nano-world, their performance is greatly influenced. Micro-fabrication process or variations of the operating situation such as temperature, humidity or pressure are usual cause of dispersion. Therefore, it seems essential to co-integrate self-testing or self-adjustment routines for these microdevices. For this feature, most existing system parameter estimation methods are based on the implementation of high-resolution digital measurements of the system's output. Thus, long design time and large silicon areas are needed, which increases the cost of the micro-fabricated devices. The parameter estimation problems based on binary outputs can be introduced as alternative self-test identification methods, requiring only a 1-bit Analog-to-Digital Converter (ADC) and a 1-bit Digital-to-Analog Converter (DAC).In this thesis, we propose a novel recursive identification method to the problem of system parameter estimation from binary observations. An online identification algorithm with low-storage requirements and small computational complexity is derived. We prove the asymptotic convergence of this method under some assumptions. We show by Monte Carlo simulations that these assumptions do not necessarily have to be met in practice in order to obtain an appropriate performance of the method. Furthermore, we present the first experimental application of this method dedicated to the self-test of integrated micro-electro-mechanical systems (MEMS). The proposed online Built-In Self-Test method is very amenable to integration for the self-testing of systems relying on resistive sensors and actuators, because it requires low memory storage, only a 1-bit ADC and a 1-bit DAC which can be easily implemented in a small silicon area with minimal energy consumption.

Liked this entry ? subscribe to Nuit Blanche's feed, there's more where that came from. You can also subscribe to Nuit Blanche by Email, explore the Big Picture in Compressive Sensing or the Matrix Factorization Jungle and join the conversations on compressive sensing, advanced matrix factorization and calibration issues on Linkedin.
By Igor at 12/20/2012 10:31:00 AM