For those of us in the Northern hemisphere, today is the day with the longest night. So it's only natural that we would be looking for the sun in our field of view for what's left of the daylight. Here is a way to do so automatically:


Given a single outdoor image, we present a method for estimating the likely illumination conditions of the scene. In particular, we compute the probability distribution over the sun position and visibility. The method relies on a combination of weak cues that can be extracted from different portions of the image: the sky, the vertical surfaces, the ground, and the convex objects in the image. While no single cue can reliably estimate illumination by itself, each one can reinforce the others to yield a more robust estimate. This is combined with a data-driven prior computed over a dataset of 6 million photos. We present quantitative results on a webcam dataset with annotated sun positions, as well as quantitative and qualitative results on consumer-grade photographs downloaded from Internet. Based on the estimated illumination, we show how to realistically insert synthetic 3-D objects into the scene, and how to transfer appearance across images while keeping the illumination consistent. 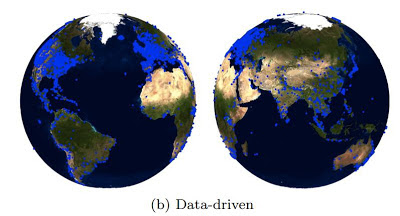 The attendant code is on the web page of the project.

Liked this entry ? subscribe to Nuit Blanche's feed, there's more where that came from. You can also subscribe to Nuit Blanche by Email, explore the Big Picture in Compressive Sensing or the Matrix Factorization Jungle and join the conversations on compressive sensing, advanced matrix factorization and calibration issues on Linkedin.
By Igor at 12/21/2012 04:58:00 AM

Email ThisBlogThis!Share to TwitterShare to FacebookShare to Pinterest
labels: implementation