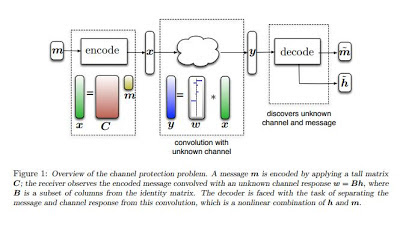 We consider the problem of recovering two unknown vectors, w and x, of length L from their circular convolution. We make the structural assumption that the two vectors are members known subspaces, one with dimension N and the other with dimension K. Although the observed convolution is nonlinear in both w and x, it is linear in the rank-1 matrix formed by their outer product wx. This observation allows us to recast the deconvolution problem as low-rank matrix recovery problem from linear measurements, whose natural convex relaxation is a nuclear norm minimization program. We prove the eff ectiveness of this relaxation by showing that for \generic" signals, the program can deconvolve w and x exactly when the maximum of N and K is almost on the order of L. That is, we show that if x is drawn from a random subspace of dimension N, and w is a vector in a subspace of dimension K whose basis vectors are \spread out" in the frequency domain, then nuclear norm minimization recovers wx without error. We discuss this result in the context of blind channel estimation in communications. If we
have a message of length N which we code using a random L N coding matrix, and the encoded message travels through an unknown linear time-invariant channel of maximum length
K, then the receiver can recover both the channel response and the message when L & N + K, to within constant and log factors.

The attendant code implementing examples of this paper is here.

Liked this entry ? subscribe to Nuit Blanche's feed, there's more where that came from. You can also subscribe to Nuit Blanche by Email, explore the Big Picture in Compressive Sensing or the Matrix Factorization Jungle and join the conversations on compressive sensing, advanced matrix factorization and calibration issues on Linkedin.
By Igor at 12/05/2012 04:58:00 AM