The high stakes of Curiosity's Entry, Descent, and Landing (EDL)

And so it begins, Curiosity is entering Mars' atmosphere at 13,000 mph. We'll know when it has properly landed in about 16 minutes, 7 minutes for the actual entry and landing (EDL) and about 9 minutes for the signal to get back to Earth.

Well, while we are waiting for these very long seven minutes + signal time, I added the price tag for Curiosity (the MSL mission) 2.5B$ against the complexity index featured in this Cost of Success or Failure versus Complexity in Space Voyages graph. mentioned in a  recent National Academies of Science report. 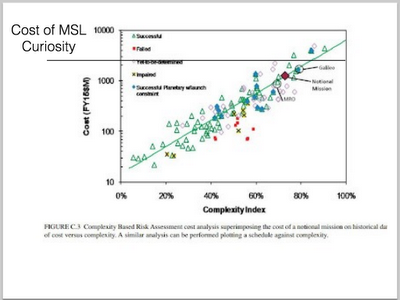 What is the estimated complexity index of Curiosity, I don't know so I cannot figure out which of these mission is MSL. However, this is what I found on a cursory look from Why is Mars so hard? a 2003 article:

The Aerospace Corporation study assigned each mission a “Complexity Index” score between 0 and 1: 0 for the least-complex mission in the study group and 1 for the most complex. MER received a Complexity Index score of 0.81, putting it the same category of missions as NASA’s flagship outer planetary missions Galileo and Cassini.

MER are the two smaller rovers already on Mars (Opportunity and Spirit). It would seem that Curiosity is a little more complex especially considering it is bigger and because of its delicate landing procedure for which the outcome we are all waiting for. 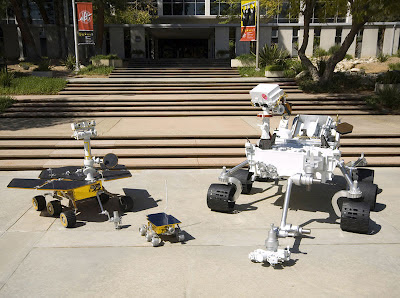 However, at the same time, it uses some of the technology already used in MER and it is also simpler than MER because it uses plutonium-238 for its RTGs and therefore does not have to rely on solar panels for power. In short, it very likely that Curiosity is above the regression line at lower complexity than 80% which puts it in a sweet spot.

This entry, descent, and landing (EDL) success of Curiosity will prove itself to be of importance not just for Curiosity but also for future rovers such as MAX-C: From the NAP report:(page 271):

A final point regarding MAX-C is that its success depends in part on the success of the MSL EDL system. If that system functions properly in 2012, then a $2.5 billion MAX-C mission should go forward for launch in 2018. If it fails, however, then NASA will have to reconsider the priority and schedule for MAX-C. If the cause of failure can be determined and appropriate and affordable changes can be made in time to preserve a 2018 launch, then MAX-C can continue on schedule. But if uncertainties remain or if the necessary changes cannot be made by 2018, then MAX-C should slip in priority and schedule relative to other large-class missions.

Much is at stake and you can watch it live (minus EDL and the speed of light) on NASA TV. Godspeed Curiosity !

- Update: Curiosity has landed. Raw images can be found here -

Yes it was cancelled but people are still planning on a missiin that uses this type of sky-crane/EDL approach, see http://en.wikipedia.org/wiki/Mars_Astrobiology_Explorer-Cacher

"In April 2011, because of a budgeting crisis, a proposal was announced to fly only one rover in 2018 that would be larger than either of the vehicles in the paired concept, ExoMars (ESA) and MAX-C (NASA).[8] One suggestion was that the new vehicle be built in Europe and take on a mixed identity of European and American instruments. NASA agreed to provide the interplanetary rocket and the "Sky Crane" landing system. Despite the proposed reorganization, the goals of the 2018 mission opportunity would stay broadly the same: namely, to look for signs of past or present life by drilling into the soil and packaging or caching rocks that able to be lifted and dispatched to Earthly laboratories by a subsequent mission.[8]"