Predicting the Future: The Steamrollers

[ Thus is part 1. Part 2 is here:Predicting the Future: Randomness and Parsimony ]

In order to predict what will happen on August 25th, 2030, here is some history and perspective: 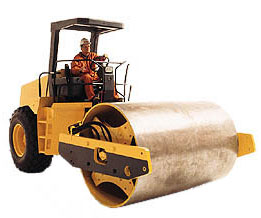 In 1975, while they had no idea how it would affect their business, Kodak engineers produced the first digital camera using a technology called CCD. It took the economies of scale of CMOS (brought forth by the development of computing) to drive down the cost of cameras so that anybody could own one. 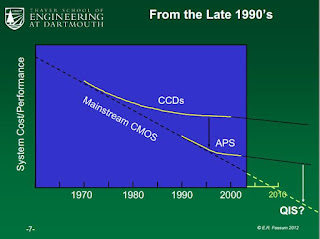 CMOS for imaging started in the lab in the mid-90's, fast forward 14 years later, a billion smartphones with integrated CMOS cameras are produced per year. In short the economies of scale that followed Moore's law enabled the growth from a prototype into a mass market item in little over a decade. It did not happen by magic as entire industries' capital and government funding was poured in making this reality happen. In fact, algorithm development also helped. From Fueling Innovation and Discovery: The Mathematical Sciences in the 21st Century, there is a description of how the Fast Multipole Algorithm (FMM), discovered in the late 80s, helped:


....The applications of the Fast Multipole Method have not been limited to the military. In fact, its most important application from a business perspective is for the fabrication of computer chips and electronic components. Integrated circuits now pack 10 billion transistors into a few square centimeters, and this makes their electromagnetic behavior hard to predict. The electrons don’t just go through the wires they are supposed to, as they would in a normal-sized circuit. A charge in one wire can induce a parasitic charge in other wires that are only a few microns away. Predicting the actual behavior of a chip means solving Maxwell’s equations, and the Fast Multipole Method has proved to be the perfect tool. For example, most cell phones now contain components that were tested with the Fast Multipole Method before they were ever manufactured....

Some could argue that there must be a caveat, that this Moore's law cannot continue forever. Indeed, witness the recent bumps that have emerged in this rosy picture in the Scariest Graph I've Seen Recently. But that would be too pessimistic, this type of comparison featuring upcoming showstoppers with current technologies never allows for the inclusion of other competing technologies (see 1-bit cameras concepts (QIS, Gigavision Camera)), hence, because there is no reason it will stop, we will consider Moore's law to be holding for the next twenty years. 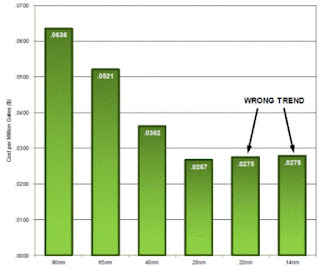 The other lesson from this recent past history shows that any competing technology to CMOS is bound to yield under the stress of this exponential growth (see Do Not Mess with CMOS ). In all, Moore's law or any law that is exponential in nature act as a steamroller and provides the best predictor to what is going to happen in the next fifteen to eighteen years.


In those cases of rapid growth, one always wonder if we are witnessing some sort of transient, an accidental bump or some sorts of asymptotics i.e. a real "law". Thanks to the Nanopore technology featured in a real test this year (2012), it looks like the growth rate of the Genomics law is bound to remain larger than Moore's law for a while longer.  This fact translates into, for instance, the fact that data generated by genomics will overwhelm data currently produced by imaging CMOS (to give an idea of the growth of images and videos, YouTube recently stated that 72 hours of videos were uploaded to YouTube every minute  ). While it took 14 years to go from one prototype to 1 billion units generated large amount of data in the CMOS example. It may take a shorter time span for this genomics  technology to be an integral part of the medical profession and be part of our everyday life through synthetic biology.

It is stunning and somehow seems ludicrous to think of such a rapid integration of genomics into medicine.  Indeed, one wonders how can something like this be that fast ? I have two examples

"....Interpreting the Human Genome
In all, human DNA contains about 3 billion “base pairs,” or rungs of the staircase. The goal of the Human Genome Project was to list all of them in order. Unfortunately, chemists can sequence only a few hundred base pairs at a time. To sequence the whole genome, scientists had to chop it into millions of shorter pieces, sequence those pieces, and reassemble them. "

[Emphasis added ]
If the Nanopore technology results hold, most of these algorithms for sequencing will become effectively useless (for sequencing) as the DNA is chopped off in larger fragments than current sequencing technology and hence can easily be put back together...


In summary, in this first part of this piece on predicting the future I described two technological steamrollers that will shape our technology landscape for the next 18 years. In part 2, I will describe  the type of algorithms that will help us make sense of this tsunami of data being generated as a result of these two technologies. I will then try to translate this into what it will mean on August 25th, 2030. Stay Tuned.

Faster growth than Moore's? I find that impressive and I haven't seen this type of comparison yet – thanks for that!

While the genotype is surely a big "stepping stone" – especially bringing it price-wise out of research and into the realm of clinical application – and will have some major positive influence to medicine ("personal medicine"), the genotype is "static". What is truly ground breaking is the next application that follows from this, namely (RNA) gene expression technology, which can take a look at the "dynamic" situation in a human body.

Taking the gigantic amount of information from gene expression and making sense of it will be a daunting task.

A problem I see for (static) genotyping is with "small" sample sizes there turn up false positive results. A good grasp of statistical analysis plus a "sense of reality" (a understanding of the plausibility of pathological pathways) will be needed.

Plus, I expect that there will be some "paradoxes" that will have to lead to a hand full of long held believes in medical science that will be overturned.