As I was visiting the Conservatoire National des Arts et Métiers museum of Technology (CNAM) in Paris the other day, I came upon a loom that I don't think I had ever heard of before. Back in 1740's, a man by the name of Jacques de Vaucanson devised a fully automated weaving process. According to Wikipedia:

His proposals for the automation of the weaving process, although ignored during his lifetime, were later perfected and implemented by Joseph Marie Jacquard, the creator of the Jacquard loom.

From that text, one could infer that it was just an earlier design of the Jacquard loom. It doesn't seem to be the case however: 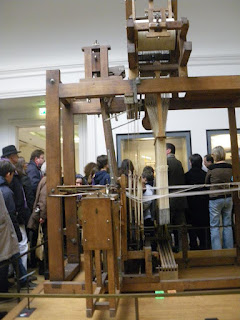 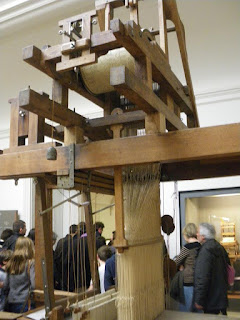 Next to the loom, there are two  descriptions, one in French and and one in English. The English version is only a subset of the full explanation provided in French. Here is my poor translation attmpt of the French text that is not provided in the English description:

A real automated weaving machine, the loom starts operating thanks to a simple handle and therefore radically transforms the gestures of the weaver. In 1747, The newspaper "Le Mercure de France" recounts the following: " One can see the whole cloth being fabricated without any human intervention, i.e. one can see the chain [sic] open, then the shuttle throws the frame, then the clapper hits the cloth with more accuracy than possible with the human hand"


The loom remained a prototype with no direct descendant. The mechanics inspired other inventors like Jacquard who did put it back in shape at the Conservatoire des Arts et Metiers at the beginning of the 19th century.

Let me get this straight, a fully programmable robot saw the light of the day in 1747 never to be directly copied later because it took jobs away from humans ? I did not know that, and I don't think I am the only one. The Jacquard loom was "inspired" by this machine and was successful a full sixty years later in part because it required human intervention. Let us also note the punch card mechanism at the top of this 1740's machine. That idea was the mainstay for programming computer in the 1960s.

Cute story 1: According to our tour guide, since the Vaucanson design required only a power source and removed human intervention. Many loom prototypes were destroyed by weavers who could become out of work had the machine been adopted. The story goes that to destroy the looms the workers used their wooden shoes (called sabot in French) and this is why the word sabotage is used when referring to the  destruction of a piece of machinery.

Cute story 2: Also according to our guide, the expression "être un ane" (being a donkey, a slang for being dumb) is an expression that comes from the fact that skilled weavers were facing being in direct competition with the unskilled labor of a power source that was generally provided by a donkey.