Yonina just sent me the following:

I hope all is well by you.
When we met in France I told you I would let you know when we have more hardware – well, the time has come …We just had a demo of new sub-Nyquist hardware we developed for radar; you can find the details in http://arxiv.org/abs/1208.2515

Thanks Yonina for the update. 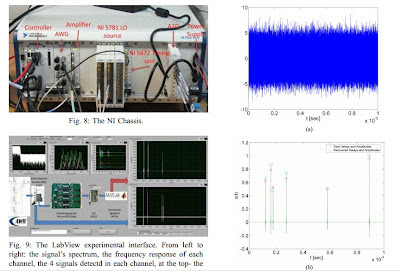 Traditional radar sensing typically involves matched filtering between the received signal and the shape of the transmitted pulse. Under the confinement of classic sampling theorem this requires that the received signals must first be sampled at twice the baseband bandwidth, in order to avoid aliasing. The growing demands for target distinction capability and spatial resolution imply significant growth in the bandwidth of the transmitted pulse. Thus, correlation based radar systems require high sampling rates, and with the large amounts of data sampled also necessitate vast memory capacity. In addition, real-time processing of the data typically results in high power consumption. Recently, new approaches for radar sensing and detection were introduced, based on the Finite Rate of Innovation and Xampling frameworks. These techniques allow significant reduction in sampling rate, implying potential power savings, while maintaining the system's detection capabilities at high enough SNR. Here we present for the first time a design and implementation of a Xampling-based hardware prototype that allows sampling of radar signals at rates much lower than Nyquist. We demonstrate by real-time analog experiments that our system is able to maintain reasonable detection capabilities, while sampling radar signals that require sampling at a rate of about 30MHz at a total rate of 1Mhz.