There are really two ways of producing some randomness. One way is to use a random medium and expect that the laws of transport will provide some sort of multiplexing. The other way is to engineer the random multiplexing. This week, we will have another example of the former but today we have an instance of both: 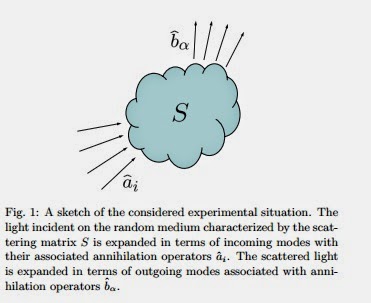 One item that comes with papers that are behind walls: I need to have access to the second paper because I wonder about the "no moving parts" claim. You reader know my email, wink wink. Without further ado:

Transmission of quantum entanglement through a random medium by M. Candé, A. Goetschy, S.E. Skipetrov

We study the high-dimensional entanglement of a photon pair transmitted through a random medium. We show that multiple scattering in combination with the subsequent selection of only a fraction of outgoing modes reduces entanglement of an initially maximally entangled two-photon state. Entanglement corresponding to a random pure state is obtained when the number of modes accessible in transmission is much less than the number of modes in the incident light. An amount of entanglement approaching that of the incident light can be recovered by accessing a larger number of transmitted modes. In contrast, a pair of nonentangled photons does not gain any entanglement when transmitted through a random medium.

Imaging at long wavelengths, for example at terahertz and millimetre-wave frequencies1, is a highly sought-after goal of researchers2, 3 because of the great potential for applications ranging from security screening4 and skin cancer detection5 to all-weather navigation6 and biodetection7. Here, we design, fabricate and demonstrate active metamaterials that function as real-time tunable, spectrally sensitive spatial masks for terahertz imaging with only a single-pixel detector. A modulation technique permits imaging with negative mask values, which is typically difficult to achieve with intensity-based components. We demonstrate compressive techniques allowing the acquisition of high-frame-rate, high-fidelity images. Our system is all solid-state with no moving parts, yields improved signal-to-noise ratios over standard raster-scanning techniques8, and uses a source orders of magnitude lower in power than conventional set-ups9. The demonstrated imaging system establishes a new path for terahertz imaging that is distinct from existing focal-plane-array-based cameras.


h/t Sylvain for the second paper.