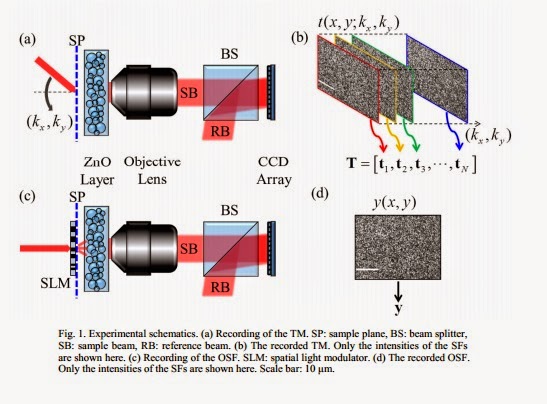 Speckle suppression is one of the most important tasks in the image transmission through turbid media. Insufficient speckle suppression requires an additional procedure such as temporal ensemble averaging over multiple exposures. In this paper, we consider the image recovery process based on the so-called transmission matrix (TM) of turbid media for the image transmission through the media. We show that the speckle left unremoved in the TM-based image recovery can be suppressed effectively via sparse representation (SR). SR is a relatively new signal reconstruction framework which works well even for ill-conditioned problems. This is the first study to show the benefit of using the SR as compared to the phase conjugation (PC) a de facto standard method to date for TM-based imaging through turbid media including a live cell through tissue slice.

In optics, everything that is noise is called "speckle" or at least this is how it seems to an outsider. In the paper mentioned today, the authors used the TM approach of Popoff et al (see also [3,4]) to build a Transmission matrix for an opaque lens/turbid media but found out that image reconstruction is tough because of the speckle (noise).

Let me explain: When an image is projected through a gaussian (opaque material/turbit medium), the result is a speckle, a bunch of spots that is difficult to intepret (see the video in Additional Photos and Video to "Imaging With Nature: Compressive Imaging Using a Multiply Scattering Medium" ). In this paer however, the authors mean to say that the speckle is really the difference between what is expected through the projection of the gaussian matrix and what is recorded from the experiment. 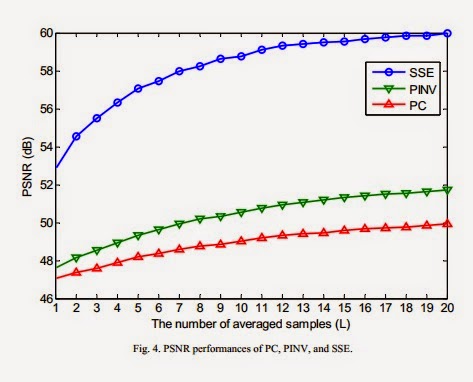 Given all that, and instead of going through a Tikhonov regularization approach in order to perform an image reconstruction as had been tried before, the authors essentially remove that 'new' speckle/noise from each image thanks to a sparse approximation of that image. They then add those reconstructed images together in order to get the PSNR figure shown above. This is interesting.

Let us note that the number of images added together is rapidily growing and seems to be of the same order of magnitude (if memory serves) as the number of images needed in the Tikhonov approach. This approach might not lead to an optimum number of frames (if one is interested in that). Other than that this is a great investigation.

How does this compare to our recent paper ?

We also resorted to gather several frames but instead of cleaning each frame up and summing them together as in the paper above, we constrained the problem further by stating that all the frames where in fact the result of the same object thereby leading us to an MMV approach. With that approach, the number of consecutive frames dropped to about 3 to get a good image. Thanks to sharp phase transitions, we also had a bound on the type of scene that could be imaged and what could be accomplished with the system (through the phase transition diagram, Figure 5 of this paper).