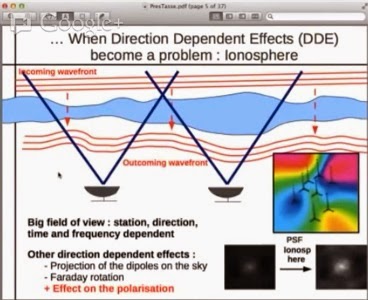 In yesterday's post I mentioned that there would be more about SKA (remember this entry on SKA as an Atmosphere Monitoring Station ?)

Well for one, Ludwig Schwardt mentioned this in the comment section

Hi njh and Igor,
As someone who works on the SKA and on one of its pathfinder instruments (MeerKAT), as well as on the DOME project advertising the postdoc position, I feel obliged to respond :-)
Radio telescopes *do* operate during the day, even if it is just to make the optical astronomers jealous (although they have the last laugh when you see how weak astronomical radio signals are). The Sun is not that big a problem to first order as our typical dishes are only sensitive to a one-degree patch on the sky and they can avoid the Sun during observations. Some very sensitive observations might still need to remove a tiny contribution from the Sun by the appropriate modelling.
A ballpark number for the solar energy received on the Earth's surface is 1 kW per square meter. A square kilometer would therefore receive 1 GW. Given that the Sun is only up half the time and blithely ignoring clouds and other inefficiencies we have the potential for a 500 MW power plant. While this is large for a solar plant, it is below average for a coal-fired plant. The project will also need substantial additional funding to turn it into a solar plant. Maybe an idea for when the SKA retires? :-)
To comment on Igor's statement that normal operation of the SKA during daylight ought to provide some information on the atmosphere above it: this is true. The radio signals to be received by the SKA (during the day or night) will mostly be affected by disturbances in the ionosphere and to a lesser extent by water vapour in the troposphere. These (unwanted!) phase drifts and attenuations have to be modelled and calibrated out to obtain a clear image. This is typically done in conjunction with direct atmospheric measurements using GNSS satellites and water vapour radiometers.

Thank you  Ludwig . Yes, somebody's noise is someone else's signal, it's just a different convolution. By the same token, I also came across this preprint, 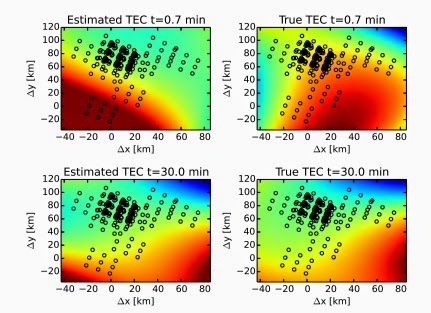 
We present a new calibration scheme based on a non-linear version of Kalman filter that aims at estimating the physical terms appearing in the Radio Interferometry Measurement Equation (RIME). We enrich the filter's structure with a tunable data representation model, together with an augmented measurement model for regularization. We show using simulations that it can properly estimate the physical effects appearing in the RIME. We found that this approach is particularly useful in the most extreme cases such as when ionospheric and clock effects are simultaneously present. Combined with the ability to provide prior knowledge on the expected structure of the physical instrumental effects (expected physical state and dynamics), we obtain a fairly cheap algorithm that we believe to be robust, especially in low signal-to-noise regime. Potentially the use of filters and other similar methods can represent an improvement for calibration in radio interferometry, under the condition that the effects corrupting visibilities are understood and analytically stable. Recursive algorithms are particularly well adapted for pre-calibration and sky model estimate in a streaming way. This may be useful for the SKA-type instruments that produce huge amounts of data that have to be calibrated before being averaged.

as a side note, one can read in the paper the following tidbit:

It is important to note that deconvolution algorithms, are also Physics-based solvers estimating the sky brightness, potentially taking DDE calibration solution into account (Bhatnagar et al. 2008, 2013; Tasse et al. 2013). Latest imaging solvers can also estimate spectral energy distribution parameters (Rau & Cornwell 2011; Junklewitz et al. 2014). Most of these imaging algorithms are now well understood in the framework of compressed sensing theory (see McEwen & Wiaux 2011, for a review). Their goals, constrains and methods are however very diﬀerent from purely calibration-related algorithms, and we will not discuss them further in this paper.

I would not be so dismissive, other people are taking a stab at blind calibration issues. There can't that many stars. The initial post was a SKA job announcement, that might be a way to look into this calibration issue with constraints of a new kind. I am saying this but I have no insider's knowledge on the what the job really entails.

The other videos on SKA related calibration and computation issues can be found in the Calim 2012 workshop YoutTube channel.

Thanks for peeking into our world!

I see that you discovered the CALIM 2012 YouTube channel... I helped to organise this workshop! The main workshop site is a bit elusive on Google, so I'll repeat it here in case someone wants to look at the slides or find links to older workshops: http://calim2012.ska.ac.za/. This series of workshops gives a good overview of the current research on calibration and imaging in radio astronomy, especially research focussed on the SKA.

The latest edition of CALIM concluded a few weeks ago (http://www.atnf.csiro.au/content/calim-2014-workshop). I gave a mild introduction to compressed sensing for radio astronomers and there were some other talks on CS too.

A related workshop with a decidedly more CS slant is BASP Frontiers (http://www.baspfrontiers.org/), organised by Yves Wiaux at EPFL. This brings together practitioners from radio interferometry and medical imaging around the common theme of sparse signal processing.