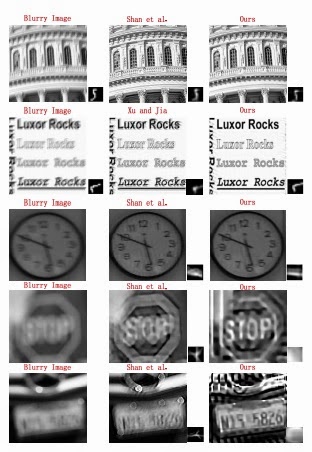 In this paper, we study the problem of recovering a sharp version of a given blurry image when the blur kernel is unknown. Previous methods often introduce an image-independent regularizer (such as Gaussian or sparse priors) on the desired blur kernel. For the first time, this paper shows that the blurry image itself encodes rich information about the blur kernel. Such information can be found through analyzing and comparing how the spectrum of an image as a convolution operator changes before and after blurring. Our analysis leads to an effective convex regularizer on the blur kernel which depends only on the given blurry image. We show that the minimizer of this regularizer guarantees to give good approximation to the blur kernel if the original image is sharp enough. By combining this powerful regularizer with conventional image deblurring techniques, we show how we could significantly improve the deblurring results through simulations and experiments on real images, especially when the blur is large. In addition, our analysis and experiments help explaining why edges are good features for image deblurring.

The implementation is on Guangcan 's page (search for "blind deconvolution (image deblurring)" ).

The arXiv link you posted is old. The current version (3) is at http://arxiv.org/pdf/1209.2082v3.pdf. Note that version 2 was submitted to CVPR, but withdrawn due to crucial errors.

Thank you for your acute eye.

I asked the author about version 2 and he assured me the pdf was removed from arxiv because he wanted to test the arxiv system (and it looks like the only way to take it out is to plead for a problem with te paper). I was also told v1 was good. I am glad to see there is a version 3 that seems to have been triggerd y my request.