As the collection of large datasets becomes increasingly automated, the occurrence of outliers will increase“big data” implies “big outliers”. While principal component analysis (PCA) is often used to reduce the size of data, and scalable solutions exist, it is well-known that outliers can arbitrarily corrupt the results. Unfortunately, state- of-the-art approaches for robust PCA do not scale beyond small-to-medium medium sized datasets. To address this, we introduce the Grassmann Average (GA), which expresses dimensionality reduction as an average of the subspaces spanned by the data. Because averages can be efﬁciently computed, we immediately gain scalability. GA is inherently more robust than PCA, but we show that they coincide for Gaussian data. We exploit that averages can be made robust to formulate the Robust Grassmann Average (RGA) as a form of robust PCA. Robustness can be with respect to vectors (subspaces) or elements of vectors; we focus on the latter and use a trimmed average. The resulting Trimmed Grassmann Average (TGA) is particularly appropriate for computer vision because it is robust to pixel outliers. The algorithm has low computational complexity and minimal memory requirements, making it scalable to “big noisy data.” We demonstrate TGA for background modeling, video restoration, and shadow removal. We show scalability by performing robust PCA on the entire Star Wars IV movie. 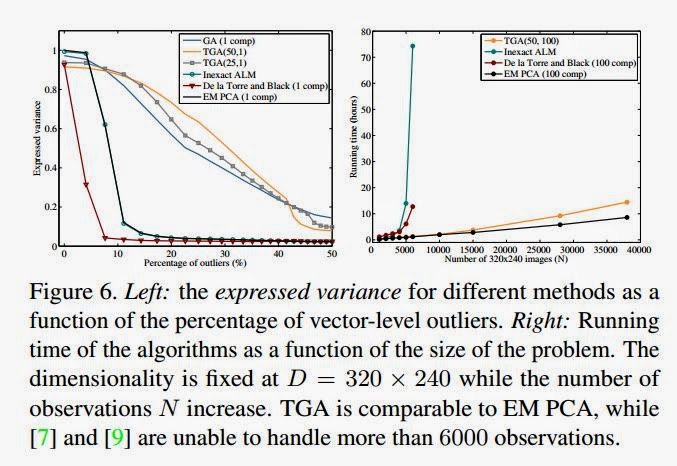 my emphasis on the underlined word.

The project page is here and the attendant code is here. It will be added to the Advanced Matrix Factorization Jungle page shortly.