When Carolyn Porco came into town at the Texas A&M Physics seminar in 1995, she presented us with the recent computations of how the atmosphere of Jupiter had been affected by the Shoemaker-Levy 9 comet. They looked llike this simulation on the video below, except her's were more amplified as you could see the wave coming back to the origine, anyhoo...

The fascinating part of that simulation was to show us that if the sphere (planet) was round, then the impact of the comet was likely having an impact some later time on the exact opposite side of the planet. The inital ripple would meet on the other side with a similar force. This was really fascinating and made a big impression on me. Ever sincethat talk I have wondered if geophysicists take into account some metric where a seismic event has a potential effect on the exact opposite side of the Earth.

Here is a highly speculative and probably wrong example. One of the most impressive volcano explosion in recent times is that of the Krakatoa island in 1883. While the event occured in August 26–27, 1883, the whole thing started with a series of lesser eruptions that began on May 20, 1883 .

What is on the Antipode of Krakatoa ? according to this tool: 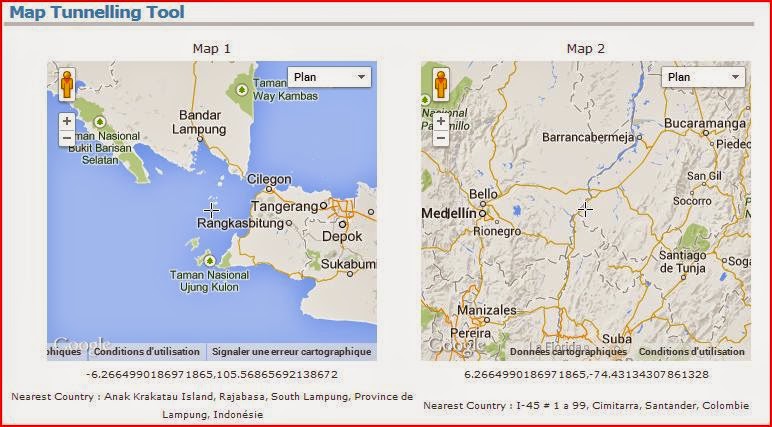 a region west of Medellin, Colombia.

Here is what I found on the Interweb, a paragraph from a book entitled Earthquakes by ARNOLD BOSCOWITZ published in 1890.

"...but on March 27, 1883, at 9-25 P.M., a long, deep underground muttering was heard at Iquique, the southernmost part of Peru. Soon after an earthquake shock startled the whole town. Two other terrestrial disturbances had occurred on the 7th of March at 1 1 '25 P.M. and at Andes (Chili), as well as in the town of Copiapo at 3 P.M. on the 8th of March. Besides, the volcano of Ometepa, in the lake of Nicaragua, which had been dormant for centuries, burst forth in smoke and flame. The shock felt at Copiapo on the 8th of March was also felt throughout nearly the whole of Colombia. At Cartagena and Turlio, at the mouth of the Atrato, the shock was violent, but did little damage. At Huda, upon the river Magdalena, the oscillation lasted more than a minute, and in the State of Antioquia much damage was done ; while Medellin, the capital of the state, came off almost scathless, though the cathedral suffered a good deal. In the town of Antioquia, the facade of the cathedral was suddenly thrown forwards in a slanting direction, several pillars were overthrown, and all the houses suffered more or less. At Garumal the prison and 35 houses were destroyed ; at Aquedas the town-hall was destroyed ; while at Abejirral the church and several of the houses were severely shaken and partly demolished. At Rinagana, the principal village in the territory of Darien, the huts, made of palm-branches, were overturned, and the rivers rose and fell with alarming rapidity. At the same time, the Taya Indians, living in the same district, had remarked with alarm the frequency of earthquakes and of the topographical changes which, they said, had completely modified the aspect of the country. They say that dull mutterings were constantly heard in the south- eastern region, which very few whites have explored ; and from this we may conclude that there was some volcanic agency at work in the district of Atrato. A large island at the mouth of the river Atrato, which had been hydrographically surveyed by a United States steamer in 1862, disappeared altogether..."

March 27, 1883 or about two months before the beginning of the Krakatoa's first series of explosion, there was a seismic event that was worthy of a mention in some History books. I realize there are always seismic activity on Earth but this one was worth a mention in that book, in the same way Krakatoa event was.

I wonder if we'd discover more obvious connections between different spots if one were to simply draw past seismic events on antipode maps ? In particular, I wonder about Turkey and its Pacific Ocean antipode.

I am sure it would be easy to do given the location of the earthquakes and draw them directly on some antipode map.

Email ThisBlogThis!Share to TwitterShare to FacebookShare to Pinterest
labels: HammingsTime

Hi Igor,
Coincidentally I've been thinking about how to defend space ships from high energy impacts (watching Gravity may have played a part in this) and I was wondering whether a spherical shell made from a sufficiently hard material could protect the occupants from the devastating shock through a similar process. I remember reading about a concrete sphere house somewhere in (Texas?) which survived a direct hit from a wrecking ball with only a small piece of spalling coming from the other side (this is the spherical version of Newton's balls). A space ship with sufficiently hard material (e.g diamond) in a perfect spherical shell might similarly be able to survive a direct hit by dumping the momentum out the other side without harming the occupants. Getting in and out of such a ship is left as an exercise.