Hi Igor,
Wanted to let you know that we've finally put out the public release of the LORAKS code (that you featured on Nuit Blanche back in December). There is a technical report that describes the implementation and walks through all of the examples included with the code available here:
http://sipi.usc.edu/reports/abstracts.php?rid=sipi-414
The tech report (and the corresponding demo code) build on the original published LORAKS paper, showing several more examples (including one multi-band signal reconstruction example that is outside the MRI context for which LORAKS was originally designed, and which I think is pretty nea).
The code itself is available here:
http://mr.usc.edu/download/LORAKS
Cheers! 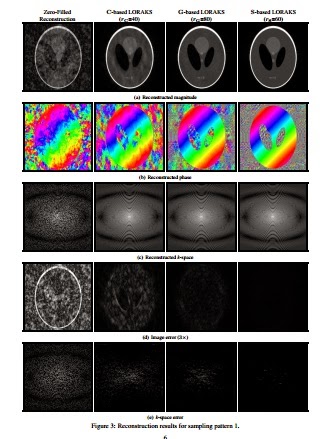 Thanks Justin. Here is the paper: Low-Rank Modeling of Local k-Space Neighborhoods (LORAKS): Implementation and Examples for Reproducible Research by Justin Haldar

Our recent work has introduced a new signal processing framework that enables the recovery of magnetic resonance (MR) images from undersampled and/or noisy Fourier data, based on the assumptions that the true image has smooth phase and/or limited spatial support. This framework, named LORAKS, relies on embedding the Fourier data from such images into high-dimensional Hankel-like matrices, which we showed would have approximately low rank when the phase/support assumptions were satisfied. The fact that these matrices have low rank implies that they have relatively few degrees of freedom relative to their number of entries, and hence can potentially be recovered from subsampled data. In contrast to conventional reconstruction methods that rely on assumptions of smooth image phase and/or limited spatial support, LORAKS does not place strict requirements on the sampling scheme used for data acquisition, and high-quality reconstructions can be obtained from both highly-structured and highly-unstructured Fourier sampling schemes. In contrast to other recent MR image reconstruction methods based on low-rank modeling, LORAKS can be used with relatively low-dimensional single-channel, single-contrast, single-timepoint MR imaging data. We have also previously demonstrated that LORAKS has distinct features and advantages relative to sparsity-based MR image reconstruction methods (which have been receiving substantial attention over the past several years), which suggests that phase and support constraints can be used in combination with sparsity constraints for even better performance.
In the spirit of reproducible research, this technical report (and corresponding supplementary material available for download at http://mr.usc.edu/download/LORAKS/) provides a MATLAB implementation of a LORAKS-based reconstruction algorithm proposed in our previous work, and presents several application examples that are not found in the existing literature (including an example outside the context of MR imaging).