At the First French-German Mathematical Image Analysis Conference, I noted a rather interesting presentation by Yohann Tendero entitled On The Foundations of Computational Photography. Of interest was his ability to develop a model for the Flutter Shutter so that better pictures could come out of this technology than regular snapshot. This is important because a few of the multiplexing schemes undertaken in compressive sensing use similar set-up. A very important item to remember when reading and experimenting with this paper and its attendant algorithm is that the inversion of the kernel doesn't take into account much of the priors on the image save for the velocity of the objects in the scene. Let me just observe that an improvement over a simple snapshot is when the scene is described by velocity distribution that is spiky on three peaks (sparsity in velocity) as opposed to a uniform velocity distribution. More on that later. 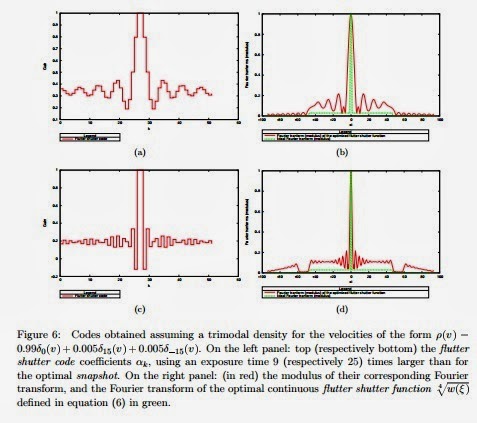 Online experiments at available at http://dev.ipol.im/~tendero/ipol_demo/flutter_2/, (username is demo and password is demo)