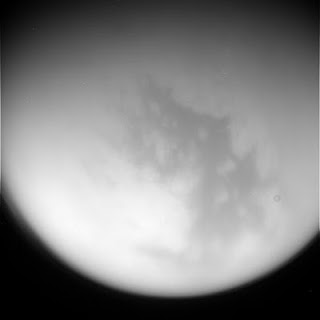 Some of you may have noticed my preference for featuring papers with code implementations earlier in the week. Well the trend continues with Compressed-Sensing Recovery of Images and Video Using Multihypothesis Predictions by Chen Chen, Eric W. Tramel and James E. Fowler. The abstract reads:

The extended results page is here and the implementation featured in the paper is here.

Image Credit: NASA/JPL/Space Science Institute, N00178529.jpg was taken on November 27, 2011 and received on Earth November 28, 2011. The camera was pointing toward TITAN at approximately 748,439 kilometers away, and the image was taken using the CL1 and CB3 filters. This image has not been validated or calibrated.

Liked this entry ? subscribe to Nuit Blanche's feed, there's more where that came from. You can also subscribe to Nuit Blanche by Email, explore the Big Picture in Compressive Sensing or the Matrix Factorization Jungle and join the conversations on compressive sensing, advanced matrix factorization and calibration issues on Linkedin.
By Igor at 11/29/2011 12:01:00 PM