Continuing on our series of Null Spaces in engineering and science, let me feature one that I initially knew nothing about until recently: Metabolic networks. What is metabolism ? From  Doutor Pedro Silva:


Metabolism is the set of chemical reactions that occur in a cell, which enable it to keep living, growing and dividing. Metabolic processes are usually classified as:
There is a very large number of metabolic pathways.


Ok, so how many is large number ? it can't be really be that bad ? Here is chart showing these pathways: 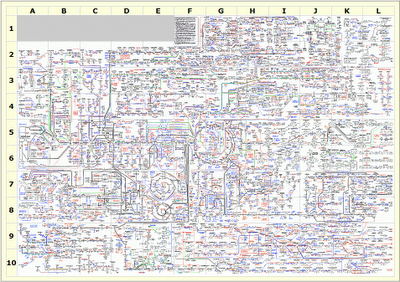 
Ok so there are many. In order to simplify the approach to evaluate these systems and identify invariant characteristics of these networks, they are assumed at steady state in what's called in computational biology or systems biology, the Flux Balance Analysis: 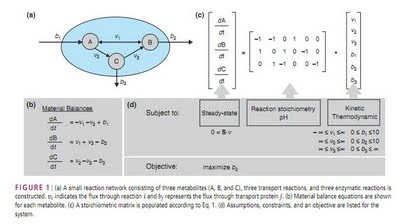 In this Flux-Balance Analysis (FBA) one utilises the null space of this stochiometric matrix: 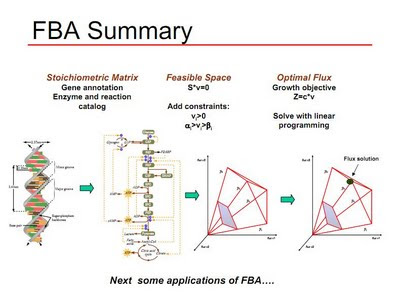 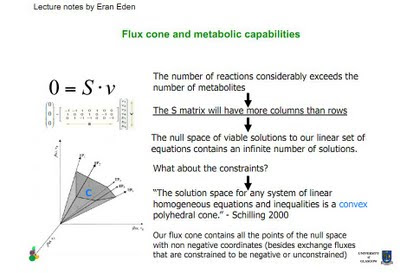 to figure out the combination of substances and fluxes that essentially may be existing at steady state, (or at very small rates of changes). They try to put additional constraints like positivity on substances to get an idea of the generic space allowed by the schematic of the connecting graph. Let us recall that in Convex Geometry, Stoichiometry and Combinatorial Chemistry, we saw a similar connection between chemistry and linear algebra. Addtional constraints on the model are mentioned as unpublished findings in 6.047/6.878 Lecture 22: Metabolic Modeling 2 or in this wikipedia page.

Beyond the need for positivity for some terms, compressive sensing offers a way to provide additional insight in the non steady state hypothesis. If the rate of the change is non-zero, as is probably often the case, compressive sensing permits the identification of the sparest solutions in substance concentration and fluxes that can "help" the system move. Unlike the static analysis used in the FBA, there is here no constraint on the null space solutions, rather there is positivity constraints on the total concentrations. That would seem to be a significant tool to identify the true metabolic processes at hand.  Here, the sparsity or low rank argument can have have a clear connection to energy and power optimized use by living bodies. Also, with the advent of all sorts of the matrix factorizations solvers coming that are either focusing on sparsity, positivity or more structured effects, one should see as a result a better understanding on how life sustain itself. That sure beats during surveillance work doesn't it ?

Liked this entry ? subscribe to Nuit Blanche's feed, there's more where that came from. You can also subscribe to Nuit Blanche by Email, explore the Big Picture in Compressive Sensing or the Matrix Factorization Jungle and join the conversations on compressive sensing, advanced matrix factorization and calibration issues on Linkedin.
By Igor at 11/14/2011 12:01:00 AM