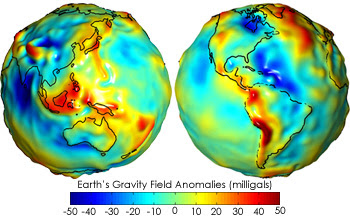 Throughout physics and engineering, we are often confronted with the null space of an operator that opens the door to all kinds of regularization. In other words, if the null space of an underdetermined system of linear equation is large, there is some probability that out of the infinite number of solutions, one can grab one that we fancy most. In Compressive Sensing we fancy sparsity. The reason that field has taken off since 2004 stems from having found ways to compute that fancy solution in polynomial time when in fact it was thought to be a combinatorial problem in the first place.  They may be other kinds of regularization like low entropy/simplicity which may not align with sparsity. Evidently to make all these other regularization work, we have to find polynomial time algorithm to find them and the condition in which they can be applied.
The purpose of this series of entries on null spaces is orthogonal to these sets of questions. We want to show that there are in fact very many instances of linear systems of equations in engineering and physics where one has to make that choice of constraining these systems to get a solution we fancy. For the past 200 years, that fancy solution was the one which reduced noise. That means that all the engineering curriculum revolve around  solving problems with energy regularizers. We need to expand and show that there is a new degree of freedom in town provided by the null space: compressive sensing focuses on the sparse or compressible ones, what other regularization will we fancy next and what type of problems can it be applied to. These entries want to answer the latter point.
Right now this is the first entry, but there should be more. If you have an idea of a specific application which may or may not have seen investigations of compressive sensing (CS is the canary in the mine as far as I am concerned) I'll be glad to feature it on the blog (with your name and the attendant ...errrrr... windfall that goes with it :)
Case 1, the null space of the gravitational map as explained in this paper:  On the Gravitational Inverse Problem by Ulvi Yurtsever, Caren Marzban, Marina Meilˇa. The abstract reads:

We discuss some mathematical aspects of the problem of inverting gravitational ﬁeld data to extract the underlying mass distribution. While the forward problem of computing the gravity ﬁeld from a given mass distribution is mathematically straightforward, the inverse of this forward map has some interesting features that make inversion a diﬃcult problem. In particular, the forward map has an inﬁnite-dimensional kernel which makes the inversion fundamentally non-unique. We characterize completely the kernels of two gravitational forward maps, one map 2840 U. Yurtsever, C. Marzban and M. Meilˇa ping mass density to the Newtonian scalar potential, and the other mapping mass density to the gravity gradient tensor, which is the quantity most commonly measured in ﬁeld observations. In addition, we present some results on unique inversion under constrained conditions, and comment on the roles the kernel of the forward map and non-uniqueness play in discretized approaches to the continuum inverse problem

I am sure I am not the first one to think that with theorem 7, earthquakes are good way of probing the whole planet's interior.

Liked this entry ? subscribe to Nuit Blanche's feed, there's more where that came from. You can also subscribe to Nuit Blanche by Email, explore the Big Picture in Compressive Sensing or the Matrix Factorization Jungle and join the conversations on compressive sensing, advanced matrix factorization and calibration issues on Linkedin.
By Igor at 11/07/2011 03:26:00 AM