So the Arora et al paper has really provoked a tsunami in the NMF world probably because like Suresh says, "One can think of the NMF as an l_1 variant of the SVD”. Another attractiveness of NMF was its easy, albeit very slow implementation. Let us say that currently we don't much implementation made available for the new crop of solvers. It's just a question of time I am sure .... 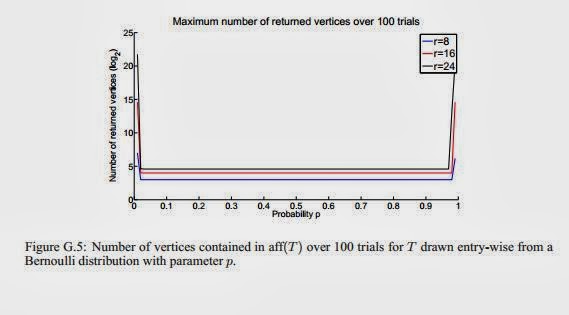 
In the Nonnegative Matrix Factorization (NMF) problem we are given an n×m nonnegative matrix M and an integer r superior to 0. Our goal is to expressM as AW where A and W are nonnegative matrices of size n×r and r×m respectively. In some applications, it makes sense to ask instead for the product AW to approximate M -- i.e. (approximately) minimize$\norm{M - AW}_F$ where $\norm{}_F$ denotes the Frobenius norm; we refer to this as Approximate NMF. This problem has a rich history spanning quantum mechanics, probability theory, data analysis, polyhedral combinatorics, communication complexity, demography, chemometrics, etc. In the past decade NMF has become enormously popular in machine learning, where A and W are computed using a variety of local search heuristics. Vavasis proved that this problem is NP-complete. We initiate a study of when this problem is solvable in polynomial time:
1. We give a polynomial-time algorithm for exact and approximate NMF for every constant r. Indeed NMF is most interesting in applications precisely when r is small.
2. We complement this with a hardness result, that if exact NMF can be solved in time (nm)o(r), 3-SAT has a sub-exponential time algorithm. This rules out substantial improvements to the above algorithm.
3. We give an algorithm that runs in time polynomial in n, m and r under the separablity condition identified by Donoho and Stodden in 2003. The algorithm may be practical since it is simple and noise tolerant (under benign assumptions). Separability is believed to hold in many practical settings.
To the best of our knowledge, this last result is the first example of a polynomial-time algorithm that provably works under a non-trivial condition on the input and we believe that this will be an interesting and important direction for future work.