"We already have cats under control": A summary of Paris Machine Learning Meetup #7 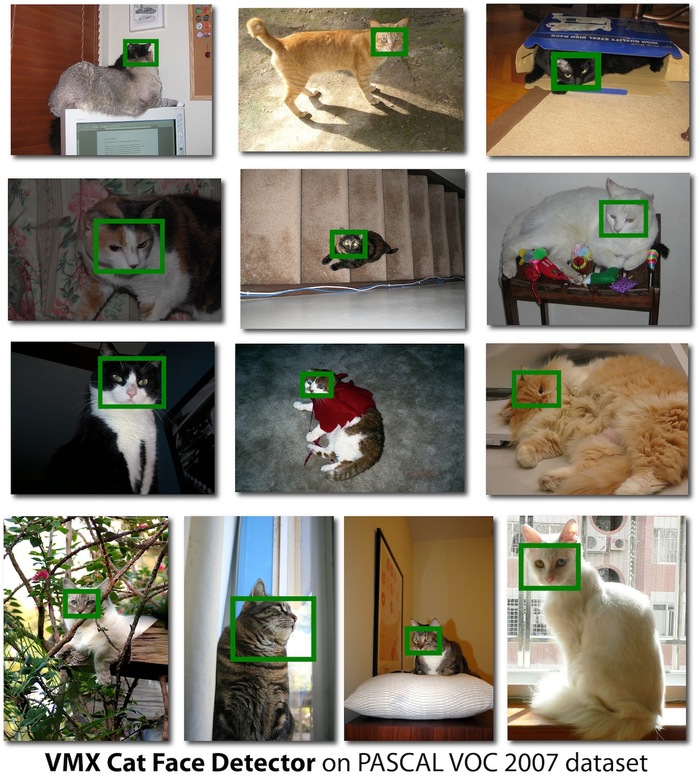 "We already have cats under control"

Following up on our first Q&A, Tom from VMX (a Machine Learning #Kickstarter campaign)  implemented a cat face detector using VMX. He also checked it against the PASCAL VOC 2007 dataset to find images with cats. From the blog entry:

...Pre-trained VMX Object Detectors
VMX will come with a set of pre-trained models.  While the fun part of using VMX is training your own specialized detectors, we understand that that are scenarios where you want access to a library of pre-existing object detectors.  You'll be able to modify those detectors and customize them for your own use (such as taking a generic face detector and making it better by giving it examples of your own face).  If there is an object you utterly love and really want a pre-trained version in VMX, just send us a message.  We already have cats under control.

Just imagine cat lovers using VMX to detect their cats intention during the day or ... the possibilities look endless.
The 7th Parisian Machine Learning Meetup was initally held with a Machine Vision theme with: VMX , Atheer One,VLAD and What does it take to win the Kaggle/Yandex competition? even though the latter presentation was an impromptu one. It took place on Wednesday January 15th, 2014 at DojoEvents. Here is the video of the Meetup. The program and attendant presentations:
I noted that the VMX project could handle local computation with about 20 objects requiring a good computer. For Atheer, I think the issue of battery is set aside as the glass seem to be aiming for a crowd next to a power plug. Kenji told us that the winning entry was based on LambdaMART beating out another of their Random Forest implementation. Patrick also mentioned a series of photos reconstructed from descriptors. That series is on Herve Jegou's page. While  Patrick pointed out it was information leakage, most folks in the crowd were simply wowed.

Many more examples on this page.


Needless to say, there is an uncanny visual parallel beween these reconstruction and the ones from MRI readings featured at the third meetup where we learned about mindreading with MRI thanks to Alexandre Gramfort. ( see also Dreaming reconstructions)

During the off moment of the meetup, we had a discussion on counting things and how it should be part of the general ML generic knowledge. Sam Bessalah mentioned the large repository of information on counting things done by Debasish Gosh and I mentioned the recent entry on the same subject here on Nuit Blanche: Frugal Streaming and Sparse Recovery with Very Sparse Compressed Counting. I think we'll have a meetup on the subject in March. Stay tuned.

Frank and I were so very impressed by how smooth the Skype Q&As went, we decided to expand the reach of these ML Meetups. Again stay tuned.

The meetup was slated to have 142 people but I counted about 110 people in all. Not bad. Next meetup event is February 12th. Don't forget about also the Paris Machine Learning LinkedIn group (225 members) where one can post jobs or find job postings. The archive of the previous meetings can be found here.