Recovering a low-rank tensor from incomplete information is a recurring problem in signal processing and machine learning. The most popular convex relaxation of this problem minimizes the sum of the nuclear norms of the unfoldings of the tensor. We show that this approach can be substantially suboptimal: reliably recovering a K-way tensor of length n and Tucker rank r from Gaussian measurements requires $\Omega(rn^{K-1})$ observations. In contrast, a certain (intractable) nonconvex formulation needs only $O(r^K+nrK)$ observations. We introduce a very simple, new convex relaxation, which partially bridges this gap. Our new formulation succeeds with $O(r^{\lfloor K/2 \rfloor} n^{\lceil K/2 \rceil})$ observations. While these results pertain to Gaussian measurements, simulations strongly suggest that the new norm also outperforms the sum of nuclear norms for tensor completion from a random subset of entries. Our lower bounds for the sum-of-nuclear-norm model follow from a new result on simultaneously structured models, which may be of independent interest for matrix and vector recovery problems.

I note from the conclusion:

More broadly speaking, to recover objects with multiple structures, regularizing with a combination of individual structure-inducing norms is proven to be substantially suboptimal (Theorem 5 and also [OJF+12]). The resulting sample requirements tend to be much larger than the intrinsic degrees of freedom of the low-dimensional manifold that the structured signal lies in. Our squarenorm model for the low-rank tensor recovery demonstrates the possibility that a better exploitation can signi cantly reduce this sample complexity. However, there are still no clear clues on how to intelligently utilize several simultaneous structures generally, and moreover how to design tractable method to recover multi-structured objects with near minimal number of measurements. These problems are de nitely worth pursuing in future study. 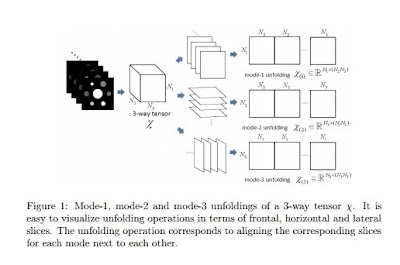 The development of energy selective, photon counting X-ray detectors allows for a wide range of new possibilities in the area of computed tomographic image formation. Under the assumption of perfect energy resolution, here we propose a tensor-based iterative algorithm that simultaneously reconstructs the X-ray attenuation distribution for each energy. We use a multi-linear image model rather than a more standard "stacked vector" representation in order to develop novel tensor-based regularizers. Specifically, we model the multi-spectral unknown as a 3-way tensor where the first two dimensions are space and the third dimension is energy. This approach allows for the design of tensor nuclear norm regularizers, which like its two dimensional counterpart, is a convex function of the multi-spectral unknown. The solution to the resulting convex optimization problem is obtained using an alternating direction method of multipliers (ADMM) approach. Simulation results shows that the generalized tensor nuclear norm can be used as a stand alone regularization technique for the energy selective (spectral) computed tomography (CT) problem and when combined with total variation regularization it enhances the regularization capabilities especially at low energy images where the effects of noise are most prominent.