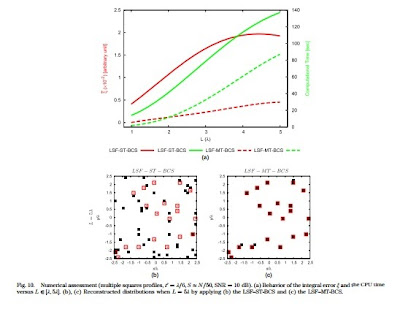 An innovative method for the localization of multiple sparse metallic targets is proposed. Starting from the localshape function (LSF) formulation of the inverse scattering problem and exploiting the multitask Bayesian compressive sensing (MT-BCS) paradigm, a two-step approach is described where, after a first estimation of the LSFscattering amplitudes, the reconstruction of the metallic objects is yielded through a thresholding and voting step.Selected numerical examples are presented to analyze the accuracy, the robustness, and the computationalefficiency of the LSF–MT-BCS technique

Here is what the spotlight summary says:

Spotlight summary: The problem of locating sparsely spaced metallic objects illuminated by electromagnetic radiation has many important applications in geophysics, localization of tunnels or pipelines, fault detection in metallic grids, biomedical monitoring, non-destructive testing, ground penetrating radar, to name a few. The problem of reconstruction of the metallic object from scattering measurements is in general quite complex due to diffraction and multiple scattering effects. The typical treatment of this problem uses physical optics modelling. The previous techniques for scatterer localization use global optimization methods, SVD based and level set based methods. Despite its great importance, the problem of sparsely located scatterers has not been treated much in the literature. In this article, the authors use the new ideas offered by the compressive sensing theory to solve this problem.
Compressive Sensing (CS) methodology utilizes the sparsity of natural images/objects (in some transform domain) to significantly reduce the requirement on the number of measurements needed to generate an image. This reduced data would traditionally be considered incomplete for the purpose of image reconstruction with sufficient resolution. Any prior knowledge of a possible sparsity of the final solution to be reconstructed is utilized in the modelling of inverse problems using CS. For instance it is now well known that natural images are compressible in scale based bases such as wavelets and this knowledge may be used right from the imaging data measurement stage if the image reconstruction incorporates CS-like strategies. In the present problem the authors use the binary local shape function approach where the region to be probed is uniformly divided into cells of equal area (something like pixels in an image). Sparsity in the problem is that the number of cells that contain the metallic object is expected to be much smaller than the total number of cells in the region. The problem of detecting these metallic regions from scattering data corresponding to illumination by a number of time harmonic fields from different angles is then modelled with a two step process: (i) Multi Task Bayesian Compressive Sensing (MT-BCS) approach that utilizes the correlation among the multiple measurements, and (ii) thresholding/voting operations. The numerical illustrations in the paper suggest that the method can handle multiple targets occupying several pixels and low SNRs with accuracy depending on the scatterer sparsity.