Toward real-time quantum imaging with a single pixel camera

I wish I would get it! If someone can enlighten me us, I'd open the blog for them to explain it (not the raster versus compressive sensing part but the quantum imaging part) In particular, how can this type of imaging get below Poisson noise? 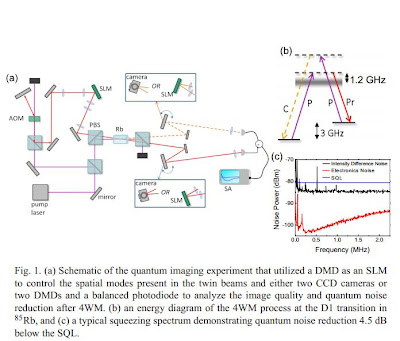 We present a workbench for the study of real-time quantum imaging by measuring the frame-by-frame quantum noise reduction of multi-spatial-mode twin beams generated by four wave mixing in Rb vapor. Exploiting the multiple spatial modes of this squeezed light source, we utilize spatial light modulators to selectively pass macropixels of quantum correlated modes from each of the twin beams to a high quantum efficiency balanced detector. In low-light-level imaging applications, the ability to measure the quantum correlations between individual spatial modes and macropixels of spatial modes with a single pixel camera will facilitate compressive quantum imaging with sensitivity below the photon shot noise limit.


Of related interest, there was a presentation by Mikhail Kobolov at Institut Langevin last week. Here is the abstract :

"Quantum limits of optical super-resolution and a priori information "

The conventional concept of resolving power of an optical instrument was developed at the end of the nineteen century in classical works of Abbe and Rayleigh. In the framework if the modern Fourier optics the resolving power of an optical system is characterised by its spatialfrequency transmission band. Classical super-resolution is an attempt to restore the spatial Fourier components of the object outside the transmission band of the system. Such superresolution is possible when one has some a priori information about the object, for example, that the object has a finite size.
We shall give an overview of the quantum theory of optical resolution and show that superresolution crucially depends on the amount of a priori information about the object. We shall prove that the standard quantum limit of super-resolution for discrete objects is much higher than that for continuous objects due to higher amount of a priori information. We shall demonstrate that one can go beyond the standard quantum of super-resolution using spatially multimode squeezed light. Finally, we shall present the latest results for the quantum limits of super-resolution for sparse optical images using the compressed sensing approach.

and some attendant papers

We experimentally demonstrate the feasibility of a super-resolution technique based on eigenmode decomposition. This technique has been proposed theoretically but, to the best of our knowledge, has not previously been realized experimentally for optical imaging systems with circular apertures. We use a standard diffraction-limited 4f imaging system with circular apertures for which the radial eigenmodes are the circular prolate spheroidal functions. For three original objects with different content of angular information we achieve 45%, 49%, and 89% improvement of resolution over the Rayleigh limit. The work presented can be considered as progress towards the goal of reaching the quantum limits of super-resolution.

Quantum limits of super-resolution of optical sparse objects via sparsity constraint by Hui Wang, Shensheng Han, and Mikhail I. Kolobov. The abstract reads:

Sparsity constraint is a priori knowledge of the signal, which means that in some properly chosen basis only a small percentage of the total number of the signal components is nonzero. Sparsity constraint has been used in signal and image processing for a long time. Recent publications have shown that the Sparsity constraint can be used to achieve super-resolution of optical sparse objects beyond the diffraction limit. In this paper we present the quantum theory which establishes the quantum limits of super-resolution for the sparse objects. The key idea of our paper is to use the discrete prolate spheroidal sequences (DPSS) as the sensing basis. We demonstrate both analytically and numerically that this sensing basis gives superior performance of super-resolution over the Fourier basis conventionally used for sensing of sparse signals. The explanation of this phenomenon is in the fact that the DPSS are the eigenfunctions of the optical imaging system while the Fourier basis are not. We investigate the role of the quantum fluctuations of the light illuminating the object, in the performance of reconstruction algorithm. This analysis allows us to formulate the criteria for stable reconstruction of sparse objects with super-resolution. Our results imply that sparsity of the object is not the only parameter which describes super-resolution achievable via sparsity constraint.

It is a quantum optics trick:

"The standard quantum limit for the noise of some optical measurement scheme usually refers to the minimum level of quantum noise which can be obtained without the use of squeezed states of light."

Hi Igor,
I did not notice that you had blogged about this until now. I'm the PI on this project (Raphael Pooser). Curt is basically right - though I might call it more than a trick ;)
As he said we used quantum noise reduction to get below the Poisson noise. The thing about quantum noise reduction is, you have to use some kind of quantum effect to obtain it. In this case it's the nonlinear interaction that occurs in the vapor cell. Using those techniques you can do quantum imaging as you can see in some of the references in the OE paper and in the OE paper itself. So, what we think is cool about this work is the potential combination of quantum imaging and compressive imaging. Please let me know if you have any questions (you have my contact info from my site or via ORNL)! (sorry if this is a double post)