I recently mentioned a comparison between nanopore sequencing and well logging ( see Of Well Logging and Nanopore Sequencing ). It recently occurred to me that one possible missing element of this analysis are knots, or more precisely how to untie knots. 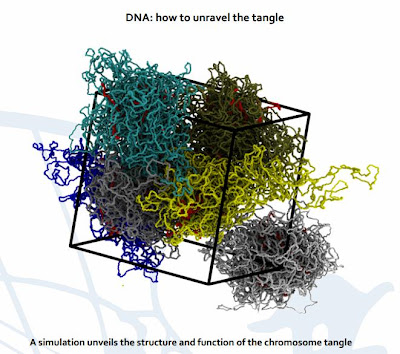 A recent study showed that gene activation seemed to be related to how entangled different part of the DNA are [1] . How is this related to nanopore sequencing and well logging ? quite simply, in the case of DNA sequencing, the 2009 paper that started it all [2], shows a figure where one can witness a non constant traveling of the DNA strand through the nanopore with G,T,C,A being separated by uneven distances:

In other words, the interdistance between the G,T,C,A as indicated in this figure is an indication of how much resistance there was from the DNA strand when pushed through the nanopore. In other words, that interdistance is a feature reflecting how knots are being forced through the nanopore. Said in another way, those interdistances are related to the DNA structure being sequenced. An information you cannot obtain with current sequencing technology. I am sure the folks at Oxford Nanopore Technologies or the folks who attended CASP10, and the Future of Structure in Biology are aware of this.  for sure one wonders if this interdistance thing is a reproducible feature.

In well logging, that type of information could produce additional information on the soil being investigated.

The connection between chromatin nuclear organization and gene activity is vividly illustrated by the observation that transcriptional coregulation of certain genes appears to be directly influenced by their spatial proximity. This fact poses the more general question of whether it is at all feasible that the numerous genes that are coregulated on a given chromosome, especially those at large genomic distances, might become proximate inside the nucleus. This problem is studied here using steered molecular dynamics simulations in order to enforce the colocalization of thousands of knowledge-based gene sequences on a model for the gene-rich human chromosome 19. Remarkably, it is found that most (

) gene pairs can be brought simultaneously into contact. This is made possible by the low degree of intra-chromosome entanglement and the large number of cliques in the gene coregulatory network. A clique is a set of genes coregulated all together as a group. The constrained conformations for the model chromosome 19 are further shown to be organized in spatial macrodomains that are similar to those inferred from recent HiC measurements. The findings indicate that gene coregulation and colocalization are largely compatible and that this relationship can be exploited to draft the overall spatial organization of the chromosome in vivo. The more general validity and implications of these findings could be investigated by applying to other eukaryotic chromosomes the general and transferable computational strategy introduced here.
Author Summary
Recent high-throughput experiments have shown that chromosome regions (loci) which accommodate specific sets of coregulated genes can be in close spatial proximity despite their possibly large sequence separation. The findings pose the question of whether gene coregulation and gene colocalization are related in general. Here, we tackle this problem using a knowledge-based coarse-grained model of human chromosome 19. Specifically, we carry out steered molecular dynamics simulations to promote the colocalization of hundreds of gene pairs that are known to be significantly coregulated. We show that most (

) of such pairs can be simultaneously colocalized. This result is, in turn, shown to depend on at least two distinctive chromosomal features: the remarkably low degree of intra-chain entanglement found in chromosomes inside the nucleus and the large number of cliques present in the gene coregulatory network. The results are therefore largely consistent with the coregulation-colocalization hypothesis. Furthermore, the model chromosome conformations obtained by applying the coregulation constraints are found to display spatial macrodomains that have significant similarities with those inferred from HiC measurements of human chromosome 19. This finding suggests that suitable extensions of the present approach might be used to propose viable ensembles of eukaryotic chromosome conformations in vivo.

Email ThisBlogThis!Share to TwitterShare to FacebookShare to Pinterest
labels: nanopore