This is the third time we mention spectroscopy as a means of performing compressive measurements. We first had the CheMin instrument aboard Curiosity then, last week, the case of the Randomized MALDI TOF MS/MS system. What all these systems share is this characteristic feature of the data i.e. spectra that are sparse. It's a clue.

In the previous instances mentioned above one had to think of a way to change some part of the instrumental procedure to make it truly compressive. Today, the instrument and the way it is used is already mostly compressive except for a tiny element at the end of the process. We are going to talk about Fourier Transform Infra-Red Spectroscopy. Actually most of the talking will be done by wikipedia. Specifically, on the topic of Fourier Transform Spectroscopy, we can read:

....Fourier transform spectroscopy is a less intuitive way to get the same information. Rather than allowing only one wavelength at a time to pass through to the detector, this technique lets through a beam containing many different wavelengths of light at once, and measures the total beam intensity. Next, the beam is modified to contain a different combination of wavelengths, giving a second data point. This process is repeated many times. Afterwards, a computer takes all this data and works backwards to infer how much light there is at each wavelength....

To be more specific, between the light source and the detector, there is a certain configuration of mirrors that allows some wavelengths to pass through but blocks others (due to wave interference). The beam is modified for each new data point by moving one of the mirrors; this changes the set of wavelengths that can pass through.

As mentioned, computer processing is required to turn the raw data (light intensity for each mirror position) into the desired result (light intensity for each wavelength). The processing required turns out to be a common algorithm called the Fourier transform (hence the name, "Fourier transform spectroscopy"). The raw data is sometimes called an "interferogram". Because of the existing computer equipment requirements, and the ability of light to analyze very small amounts of substance, it is often beneficial to automate many aspects of the sample preparation. The sample can be better preserved and the results are much easier to replicate.

Oh, ok. A computational inversion process (albeit a linear one) is needed to get back the (sparse) data. Check.

Now, more precisely on the topic of Fourier Transform Infra-Red Spectroscopy, we can read more on the advantages of such techniques 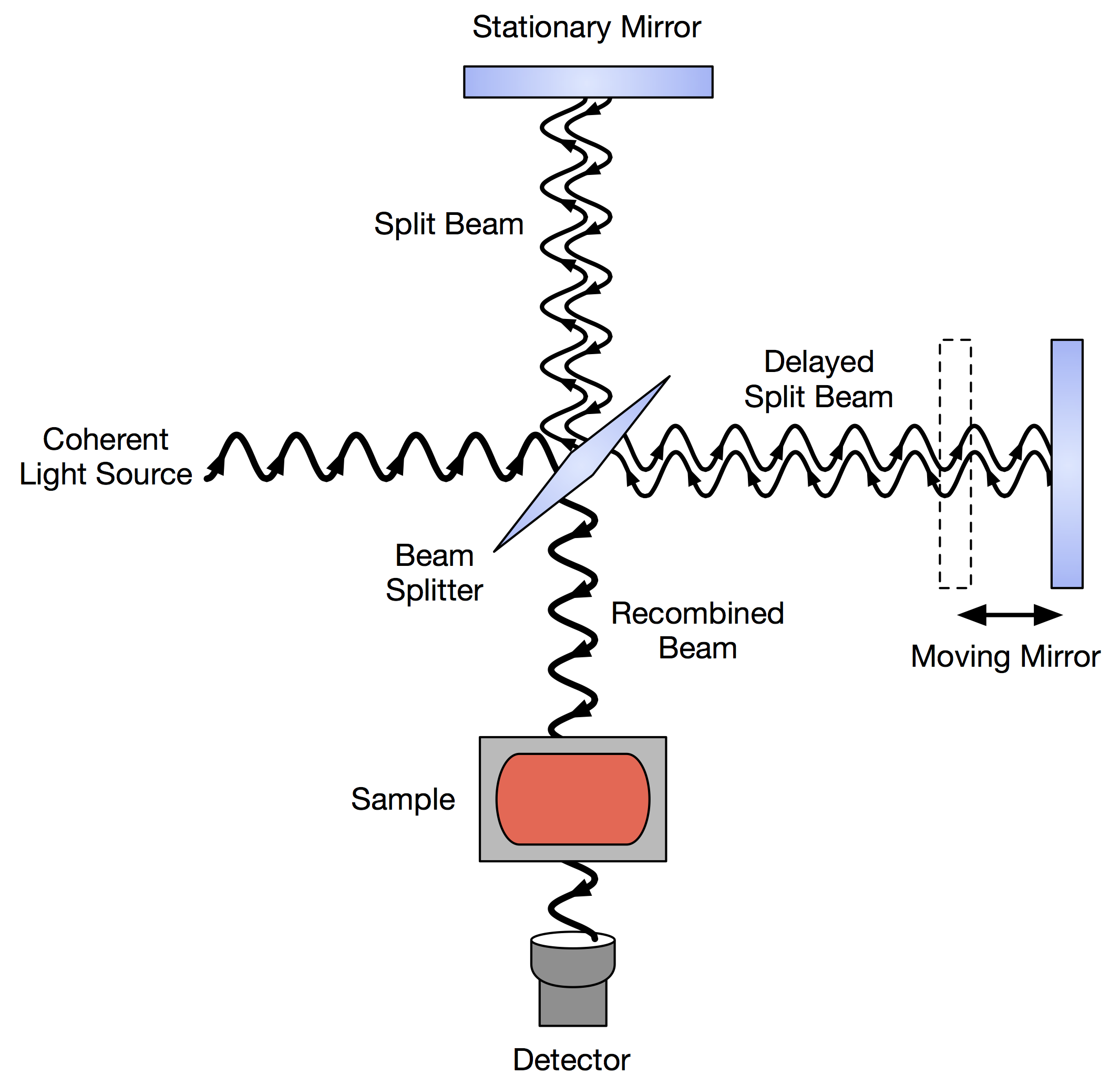 There are two principal advantages for an FT spectrometer compared to a scanning (dispersive) spectrometer.[6][7]
Other minor advantages include less sensitivity to stray light,[7] and "Connes' advantage" (better wavelength accuracy),[7] while a disadvantage is that FTIR cannot use the advanced electronic filtering techniques that often makes its signal-to-noise ratio inferior to that of dispersive measurements.[7]

They are all elements we know are exactly why compressive sensing systems are interesting. Here is an interesting historical tidbit:

By making measurements of the signal at many discrete positions of the moving mirror, the spectrum can be reconstructed using a Fourier transform of the temporal coherence of the light. Michelson spectrographs are capable of very high spectral resolution observations of very bright sources. The Michelson or Fourier transform spectrograph was popular for infra-red applications at a time when infra-red astronomy only had single pixel detectors.

How do we turn these FTIRS systems into compressive one ? well for one, quite simply by using one of these solvers instead of an Inverse Fourier Transform when "inverting" the spectrogram back to the actual (sparse) spectra.  By using these solvers, you are in effect:
That's it! Next time you talk to a chemist and they give you a blank stare about what you do, tell them they are already performing compressive sensing and how you think you can reduce their data acquisition rates. It'll be a great conversation starter.

P.S.: I'll just add this Compressive Fourier Transform Infra-Red Spectrometer technique to the list of technologies that do not exist.

P.S. 2: At some point in time, I was involved in some tiny aspect of the payload bus of the now canceled Geostationary Infrared Fourier Transform Spectroscopy (GIFTS) satellite.
.

Email ThisBlogThis!Share to TwitterShare to FacebookShare to Pinterest
labels: compressed sensing, CS, SundayMorningInsight, These Technologies Do Not Exist

Interesting. This seems connected to radio interferometry where (spatial) Fourier transform of an astronomical image is estimated from correlation (interferometry) between radio signals captured by a pair of radio telescope antenna. The probed frequency location is the one associated to the projection of the antenna pair baseline vector (the spatial vector between two antenna locations) on the image plane. This is sustained by the Van Cittert-Zernike theorem.

Reconstructing the image is then an inverse problem from partial Fourier observations.

But I should have a closer look since I may misunderstood few things.

Of related interest to your point