The Technical Side of the Nuclear Rockets Option

So there is a petition on the White House site for a Nuclear Rocket initiative. No big news as this comes back and forth every once in while. Such a technical solution was considered as recently as JIMO/Prometheus. One wonders if it will be in consideration for a Mars mission with humans given the large size of hydrogen tank needed. The staggering numbers are in part due a combination of the low efficiency of chemical rockets and the need for better space plumbing. 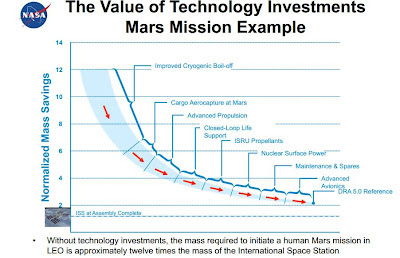 Of great importance and a subject I never see really mentioned anywhere: after six months in space, humans are really incapable of doing anything under gravity for a little while. It's one thing to land on Mars, it will be another before they can leave their seats. For that reason only and if one is serious about landing people on Mars and unless we find a pill to get space travelers to not deteriorate too much, getting there faster is really the only way. Hence the nuclear rocket option.

Nuclear Rockets that have been tested in the past, and that I am aware of, fall in a different category altogether. They use a reactor core and the propellant as its coolant. That gas coolant climbs in temperature as it goes through the reactor and then exits from the core and eventually a rocket nozzle. Unlike a chemical rocket, the temperature of the hydrogen can go higher and therefore can raise substantially the ISP of said rocket. Back in the 1960s, such program was conducted and went through several prototypes. A very nice technical summary of that story can be found in this write-up: Application of Proven Rover/NERVA Nuclear Thermal Rocket Technology for NearFuture Manned Planetary Missions by Stanley Gunn and Ernest Robinson. The ISP of those rockets can be double that of any chemical rockets. The Achille's heel of these system is their scrubbing mechanism i.e. make sure none of the reactor core material is stripped from its location and sent outside through the nozzle system.

For the technically inclined data is sparse so it of substantial interest to find the results of some of the tests of the XE-Prime engine which was probably the most advanced engine in the Technology Readiness Level ladder of that program. You can find some of the reports here (search for "XE-Prime" in DOE's database.) that feature some of the most technically advanced data I have seen on the subject. 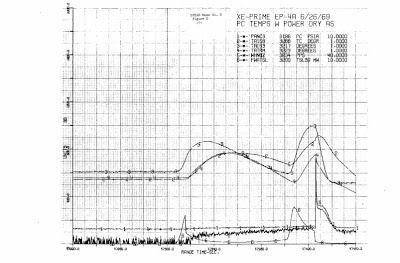 I note the following segment from the first reference:

"...Then, after the Kiwi TNT safety reactor test was conducted (to learn how destructive the reactor assembly would be if its control rods went wildly out of control) and the reactor assembly was self-destructed, the Los Alamos NRDS Assistant Director, two of his associates, and again Rocketdyne's NTR  Section Chief were exposed to the after-test radiation surrounding the destroyed reactor assembly.  The measured environment radiation was approximately 10 rem. Fifty years have passed, and the health of the above-defined test programs participants (as determined  by the NTS Medical Surveillance Project Office's evaluation) remain unaffected by  radiation...."

Some videos of the tests can be found on Youtube:

I am all for reducing travel time.
There has been a lot of promising research on ways to keep bone density from decaying (e.g. http://science.nasa.gov/science-news/science-at-nasa/2001/ast02nov_1/) but it seems to me they hardly progressed from testing in a decade
http://www.homebaseddally.com/good-vibrations-for-stronger-bones-and-pain-relief/

The moon provides a platform where dust-free solar arrays of huge size may be constructed from lunar materials and used to easily propel objects off the moon with low-g rail guns, to assemble vehicles and ahbitats for Mars missions. The arrays themselves can orbit the moon to avoid being in the dark for two weeks.

On Mars, if it was me spending years there I would want technology I could build or repair on Mars, not something I had to wait a couple years to be fixed. Again large stationary or orbiting solar arrays with protection from storms and sufficient storage would be a happier lower tech solution for self-reliant space colonies. A strike by an object could wreck a nuclear power plant.

As for propulsion to and from Mars, ion propulsion with acceleration and deceleration from orbiting solar arrays is the lowest-risk and fastest way to make the trip. Hohmann transfer orbits are not really useful unless you are using rocket propulsion from the last century. With ion propulsion it might make sense to fly closer to the sun.

I agree the science to help in reducing bone issues is still not there yet. It is also difficult to make any real progress if you have a few people in orbit.

I understand there are other scenarios but they really require much more engineering that is not at the level of readiness that NERVA attained. Furthermore none of what you propose address the issue of speed to Mars. Ion propulsion is a much more efficient system (ISP close to 10000) than NERVA but does not have its thrust capabilities. In order to have these thrust levels (and high speed to Mars), one would probably require a nuclear reactor (VASMR...). I understand the fear factor, but I would argue that the large projects you are mentioning are potentially much less safe. Then again it is just my opinion and I am known to change it with supporting experimental data.

Igor said: The Achille's heel of these system is their scrubbing mechanism i.e. make sure none of the reactor core material is stripped from its location and sent outside through the nozzle system.

Maybe it's just too hard to get the heat transfer rates needed for a rocket without putting the reaction mass in contact with the fuel.

First, the nuclear fuel is not exposed to the coolant. There is cladding involved. But to answer the theme of your question, the only system that is higher in the technology readiness level than 1 (paper study) is VASIMR http://en.wikipedia.org/wiki/Variable_Specific_Impulse_Magnetoplasma_Rocket although I am not sure of how high the thrust of the system is.