A year ago, I wondered about the connection between the Donoho-Tanner phase transition and the game of Sudoku. Recently I came across the following blog post of Yash Deshpande on “Solving” Sudoku using Belief Propagation: an implementation is not available but setting up this problem and solving it is entirely possible thanks to AMP solvers such as ASPICS and GAMP and the encoding of Sudoku puzzles as an optimization problem [1].  But as previous work as shown [2] it turns out that Belief Propagation and Thermodynamics are neatly intertwined, so one should not be overly surprised to see papers like the following: 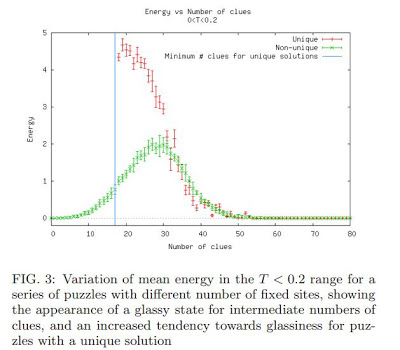 The paramagnetic and glass transitions in sudoku by Alex Williams, Graeme .J. Ackland. The abstract reads:

We study the statistical mechanics of a model glassy system based on a familiar and popular mathematical puzzle. Sudoku puzzles provide a very rare example of a class of frustrated systems with a unique groundstate without symmetry. Here, the puzzle is recast as thermodynamic system where the number of violated rules defines the energy. We use Monte Carlo simulation to show that the "Sudoku Hamiltonian" exhibits two transitions as a function of temperature, a paramagnetic and a glass transition. Of these, the intermediate condensed phase is the only one which visits the ground state (i.e. it solves the puzzle, though this is not the purpose of the study). Both transitions are associated with an entropy change, paramagnetism measured from the dynamics of the Monte Carlo run, showing a peak in specific heat, while the residual glass entropy is determined by finding multiple instances of the glass by repeated annealing. There are relatively few such simple models for frustrated or glassy systems which exhibit both ordering and glass transitions, sudoku puzzles are unique for the ease with which they can be obtained with the proof of the existence of a unique ground state via the satisfiability of all constraints. Simulations suggest that in the glass phase there is an increase in information entropy with lowering temperature. In fact, we have shown that sudoku have the type of rugged energy landscape with multiple minima which typifies glasses in many physical systems, and this puzzling result is a manifestation of the paradox of the residual glass entropy. These readily-available puzzles can now be used as solvable model Hamiltonian systems for studying the glass transition.

This is outstanding. Do you know if the author ever released his implementation on the interwebs ?

Unfortunately, no software implementation available for this as far as I know