Calibration Time is Too Damm High (part I)

I went to two meetings this week and the topic reared its ugly face in some insideous fashion. First there was this presentation by Eric Maisonnier, the CEO of Aldebran Robotics, the makers of NAO, 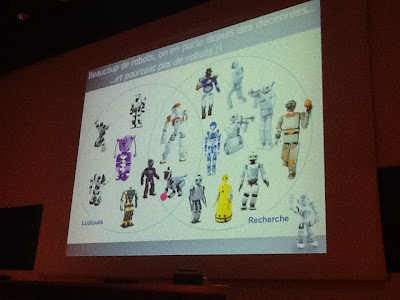 The distinct impression I got from the presentation was that the comapny was trying to cross-over from the industrial market into a more public one. Their set-up of an app store also points to them trying to be the Apple of robotics. The reason you have an Apple fanbase that makes any company envious has a lot to do with the fact that the killer apps on the Mac were initially focused on designers and the artistic types. The machine was out of the way, and the artists just seamlessly cranked out their arts. With NAO, it would seem to me that the behavorial engine still takes too much time before the robot can actually mesmerize the artists owners. And I think the underlying reason is that supervised or unsupervised learning by robots which one could call the calibration stage, still takes too much time even with engineer's time factored in. Most Artists don't deal well with SDKs. Like New York City rents, the calibration time is too damn high.


There is a calibration club on LinkedIn, let's start a conversation....