The last blog entry was the 2000th blog entry on Nuit Blanche, wow! Does that make me an "Incoherence and Randomness Specialist" yet ? Although, I must admit only 1306 entries are on compressive sensing and 65 on Matrix Factorization. Another item of difficult to picture number (at least to me) is that there have been more than 1 million page views on this blog since about three years ago. Additionally, there are 1370 people on the compressive sensing group on LinkedIn tell your colleagues to join, it has the right mix of academics and industrial folks. 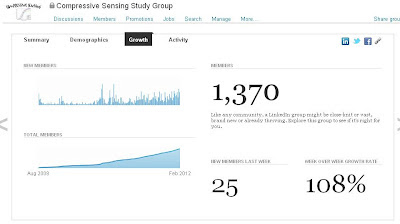 Right now, I am doing some catch-up on some papers I haven't covered yet for the past two weeks:

You can download high resolution images of the paper at http://www.quxiaobo.org/project/CS_MRI_PBDW/Figures.zip 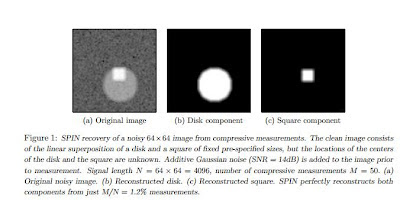 
Suppose that we observe noisy linear measurements of an unknown signal that can be modeled as the sum of two component signals, each of which arises from a nonlinear sub-manifold of a high-dimensional ambient space. We introduce Successive Projections onto INcoherent manifolds (SPIN), a first-order projected gradient method to recover the signal components. Despite the nonconvex nature of the recovery problem and the possibility of underdetermined measurements, SPIN provably recovers the signal components, provided that the signal manifolds are incoherent and that the measurement operator satisfies a certain restricted isometry property. SPIN significantly extends the scope of current recovery models and algorithms for low-dimensional linear inverse problems and matches (or exceeds) the current state of the art in terms of performance.

Somebody is going to have to explain to me one day the following: since RIP is providing a not so optimal bound for sparse recovery, then why should it be a concern if it is not optimal in other areas such as when dealing with different manifolds as in this paper on SPIN.  Taking for instance the last statement of the paper:

"...The problem of reconstructing, from a ne measurements, matrices that are a sum of low-rank and sparse matrices has attracted signi cant attention in the recent literature [7, 8, 23]. The key stumbling block is that the manifold of low-rank matrices is not incoherent with the manifold of sparse matrices; indeed, the two manifolds share a nontrivial intersection (i.e., there exist low rank matrices that are also sparse, and vice versa). Phenomena such as these make the analysis of SPIN (or similar algorithms) quite challenging, and it may be that higher-order techniques for signal reconstruction will be needed...."

ok, it will more difficult to prove theoretically that SPIN works for a larger set of issues, but the practionner of the algorithm will likely see those areas much before they are proven. I am just saying...


Anyway, Rich tells me that Chinmay will make a release of SPIN available within a few weeks. Thanks Rich!