Innovation Pursuit: A New Approach to Subspace Clustering / Continuous and Simultaneous Gesture and Posture Recognition for Commanding a Robotic Wheelchair; Towards Spotting the Signal Patterns

Two preprints on subspace clustering: One is about a new algorithm while the other one focuses on a specific application (while still making contribution to the algorithmic). I note from the second paper, the following excerpt from the conclusion

The framework we draw on here, not only leads to overwhelmingly accurate classification regardless of the sensor domain, but also, it unveils the class of the observed signal pattern sequentially by a decision tree regardless of whether the signal patterns vary in length or not. It is also closely related to signal pattern spotting on a streaming signal due to the signal used in training process. The signal used for training encompasses two different gesture patterns, the boundaries of which are not known in advance. Therefore, the boundary information is implicitly decoded through out the decision tree. 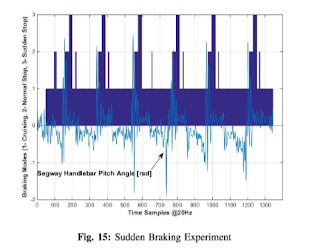 In subspace clustering, a group of data points belonging to a union of subspaces are assigned membership to their respective subspaces. This paper presents a new approach dubbed Innovation Pursuit (iPursuit) to the problem of subspace clustering using a new geometrical idea whereby each subspace is identified based on its novelty with respect to the other subspaces. The proposed approach finds the subspaces consecutively by solving a series of simple linear optimization problems, each searching for some direction in the span of the data that is potentially orthogonal to all subspaces except for the one to be identified in one step of the algorithm. A detailed mathematical analysis is provided establishing sufficient conditions for the proposed approach to correctly cluster the data points. Remarkably, the proposed approach can provably yield exact clustering even when the subspaces have significant intersections under mild conditions on the distribution of the data points in the subspaces. Moreover, It is shown that the complexity of iPursuit is almost independent of the dimension of the data. The numerical simulations demonstrate that iPursuit can often outperform the state-of-the-art subspace clustering algorithms, more so for subspaces with significant intersections.

Spotting signal patterns with varying lengths has been still an open problem in the literature. In this study, we describe a signal pattern recognition approach for continuous and simultaneous classification of a tracked hand's posture and gestures and map them to steering commands for control of a robotic wheelchair. The developed methodology not only affords 100\% recognition accuracy on a streaming signal for continuous recognition, but also brings about a new perspective for building a training dictionary which eliminates human intervention to spot the gesture or postures on a training signal. In the training phase we employ a state of art subspace clustering method to find the most representative state samples. The recognition and training framework reveal boundaries of the patterns on the streaming signal with a successive decision tree structure intrinsically. We make use of the Collaborative ans Block Sparse Representation based classification methods for continuous gesture and posture recognition.

Liked this entry ? subscribe to Nuit Blanche's feed, there's more where that came from. You can also subscribe to Nuit Blanche by Email, explore the Big Picture in Compressive Sensing or the Matrix Factorization Jungle and join the conversations on compressive sensing, advanced matrix factorization and calibration issues on Linkedin.
By Igor at 12/08/2015 12:09:00 AM